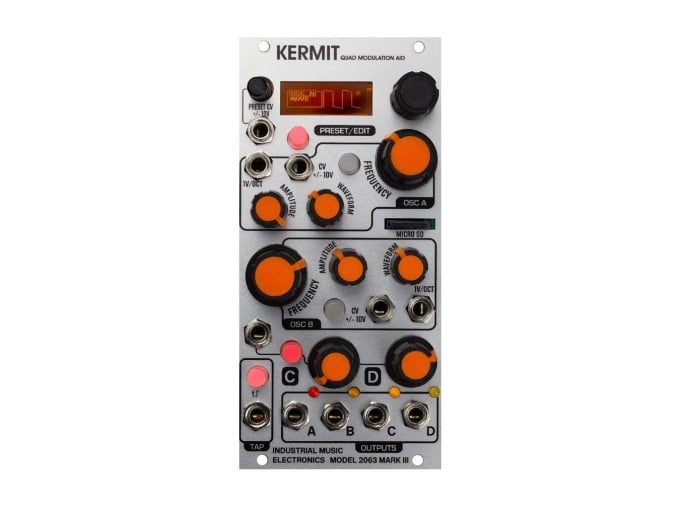 The Industrial Music Electronics Kermit MkIII is a four-channel LFO, grungy oscillator, and modulation mega-source that provides flexible CV generation with MkIII preset capabilities. Each channel contains a one-axis morphable wavetable oscillator, capable of a wide range of functions and customizable waveforms. Kermit uses a 16-bit DAC which performs best at low frequencies, but the "character" processing reduces the signal all the way down to 8-bits/32 samples.

Waveforms can be created using the free WaveEdit program and uploaded via the microSD card. 64 wavetables can be saved as eight banks of eight waveforms that can be morphed. Each channel can act as a wavetable LFO, tap tempo LFO, audio oscillator, one-shot envelope, smooth random voltage generator, stepped random generator, sample and hold, track and hold, code scan, or digital noise. The tap tempo function has both a button and input jack and is displayed on the OLED as a BPM. If using one of the tempo-synced modes, the channels will oscillate based on divisions or multiplications of the master tap tempo.

Channels A and B have full sets of controls, with dedicated knobs for frequency, waveform, and amplitude. An additional layer of control can be unlocked by holding the channel's button and turning knobs. Holding the encoder while turning controls will assign the CV input to that control, with more than one assignment possible at the same time. Holding another channel's button and modifying a control will route the other channel to internally modulate that parameter, useful for creating complex cross modulation without the need for patch cables. Channels C and D have more limited controls, two knobs and one CV input between the two of them. Further editing can be achieved using the menu or through hotkey combinations.

Where Kermit really shines is its use of the MkIII preset management system. It allows you to quickly save, recall, and morph between presets which can be done both manually or with external CV or triggers. This allows you, for example, to morph from four tempo-synced LFOs with different divisions to two stepped random outputs, a one-shot envelope, and a track and hold. Or any combination of the available modes. The applications are vast, particularly in smaller systems where real estate is a concern of the user.