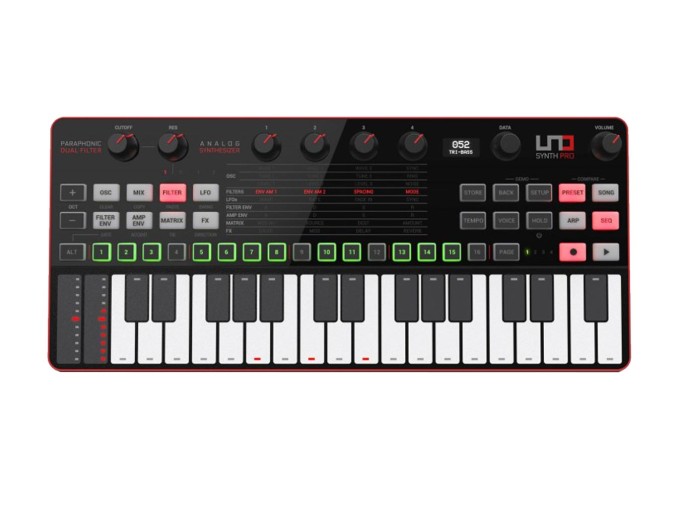 The desktop version of the IK Multimedia Uno Synth Pro is a highly portable, powerful analog synthesizer that brings the same massive sound from the larger Keyboard version but in a streamlined package. Perfect for recording or performing on the go, the Uno Synth Pro desktop version can be powered by your computer's USB port, obviating the need for additional power supplies or wall warts. Replacing the mod wheels and full sized keys are a pair of capacitive touch strips and 23 capacitive touch keys, each of which provide a tactile, surprisingly expressive interface for music making.

Outside of these differences, the desktop version, like its bigger sibling, makes zero compromises on features, quality of sound, and ease of use. The Uno Synth Pro's three analog oscillators feature continuously morphing waveshapes that can be configured in either Monophonic or Paraphonic operation. In Monophonic mode, you can stack, detune, ring-modulate, or FM the oscillators to create staggeringly massive tapestries of sound, while in Paraphonic mode, each oscillator can be assigned its own pitch, facilitating three voice chords. Following the oscillators comes a pair of creamy analog filters, selectable from a set of 24 modes, and which can be routed in serial or parallel configurations. Dedicated envelopes for the filter and amplifier allow you to shape your sound's timbre and loudness to your liking, while a suite of 96kHz digital effects add shimmer and sheen to your final output.

The depth of options offered by the Uno Synth Pro can be easily managed with its intuitive storage system. Users can save up to 256 rapidly-recallable presets, and in Song mode up to sixty-four such presets can be chained together to create complex, dynamic tracks. A sixteen slot modulation matrix, configurable for each preset, adds a level of sophistication in the Uno Synth Pro's sound design that rewards experimentation and discovery. On top of all of this, the Uno Synth Pro boasts impressive CV/Gate and MIDI functionality, allowing the instrument to shine in a multitude of studio applications. Lest the diminutive appearance of this desktop instrument deceive you, the Uno Synth Pro packs a powerful punch!