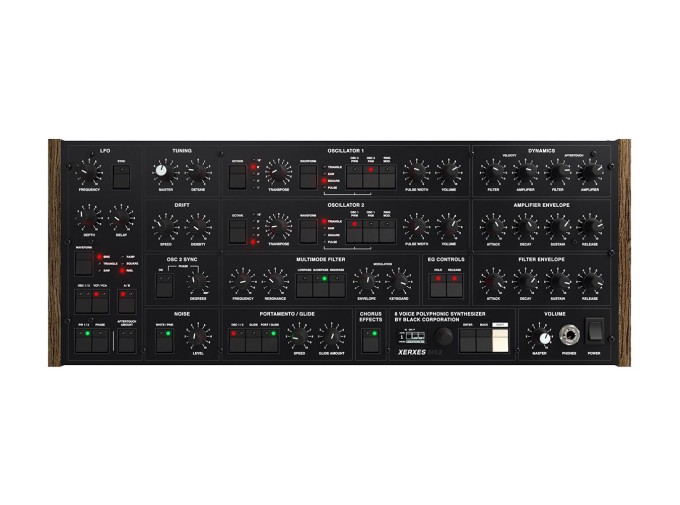 Inspired by the Elka Synthex, the Xerxes from Black Corporation is an MPE-capable synth capable of everything from rich and spacious soundscapes, to leads and basses with noise and cross-modulated grit. And in a departure from their previous, “rack-mount only” instrument designs, the Xerxes is Black Corp’s first instrument to include wooden side panels for desktop use.

The Xerxes is eight-voice polyphonic, having two digitally controlled oscillators, an analog multimode filter, two LFOs and two ADSR envelopes per voice. For adding lushness to your sounds, there is also a BBD-based stereo chorus.

For each voice, each of the two oscillators has discrete selection of traditional waveforms: triangle, saw, square, and pulse. But where things start to become interesting is the following section, allowing for cross-modulation of pulse-width and pulse-amplitude between the two oscillators, as well as traditional ring modulation, offering no shortage of interesting timbres and sonic variety. Each oscillator also has an individual octave switch and transposition control, with global tuning and detuning controls affecting both. And if the precision of the DCOs leaves a bit of desire for a little less predictability and stability, the Drift section allows you to dial in a bit more analog character and add a bit of uncertainty to the precise tuning of notes. Furthermore, oscillator two also allows for hard sync, with control over the phase reset point of the sync.

The multi-mode filter offers a selection between a 24dB/oct lowpass filter, a 12dB/oct highpass filter, and two bandpass filters: one having a 6dB/oct slope, and the other being 12dB/oct.

Utilizing a similar workflow to the Kijimi, the Xerxes features a simpler modulation section, allowing you to route the LFOs to your choice of typical destinations such as the VCA, oscillator pitch, filter cutoff, and pulse width, with the interesting addition of the previously mentioned sync phase point of oscillator two. For extra expressiveness, the LFO features delay and parameter-assignable depth, as well as aftertouch control over the intensity of modulation.

Like the other offerings from Black Corporation, Xerxes also supports polyphonic aftertouch and full MPE implementation. Paired with the right controller, and with the Dynamics section allowing you to route per-note velocity and aftertouch control to the filter and VCA, Xerxes opens itself up to being an incredibly rich and expressive instrument. Xerxes also has plenty of storage for presets, offering a generous 10 banks of 128 sounds each.

New for the Mk2 version, Xerxes now offers balanced 1/4" audio outputs as well as the ability to provide high-quality audio over USB. The VCA section has also been redesigned, on top of numerous other small improvements to the design.

Related ArticlesWhat is MPE?MIDI Polyphonic Expression + New Dimensions in Sound
Product Demo Videos
Black Corporation Xerxes Analog Polyphonic Synthesizer
Inspired by the rare Elka Synthex, Xerxes is the newest polysynth from Black Corporation. Bringing the sound and techniques of the Synthex to a wider audience than ever before, Xerxes provides new access to a wide range of tones from edgy to atmospheric.

Xerxes has a sound that feels distinctly from the 1980s, capable of rich, warbling strings, punchy brass, and ethereal pads. It exudes a fizzy, sparking high-end energy that makes strings come alive and sync sounds bite through any texture. But it truly excels at sounds that make use of its extensive modulation matrix—creating lurching, grinding modulated textures that meld its oscillators' raw grit with its filters' smooth, resonant response.

And like the Deckard's Dream and Kijimi before it, the Xerxes is also fully MPE-compatible—making it one of the most expressive and playable analog synths available.
Black Corporation Xerxes Mk2 Polyphonic Analog Synthesizer Module Reviews
Register with :