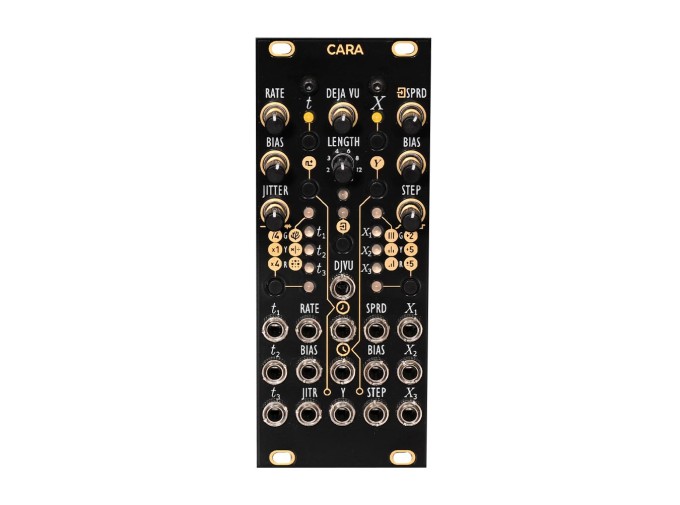 Cara from After Later Audio is a slimmed down version of Marbles from Mutable Instruments, delivering the same beloved flavors of clocking, fluctuating voltages, and random sampling as the original. Like the original, Cara comprises of three sections, handling rhythms, voltages for pitch sequencing or other purposes, and the looping Deja Vu probabilistic pseudo-sequencer.

The left side, known as the t generator, contains the module's master clock at its core, with the ability to divide or multiply the clock rate by four. Jitter applies everything from subtle timing fluctuations to totally chaotic shifts. Of the three outputs, t2 follows the clock, but t1 and t3 support three different modes of deriving triggers from the clock: Bernouli gate-style coin toss probabilities, random division/multiplication ratios, or rhythmically alternating between both outputs.

The right side, the X generator, provides three distinct random voltage outputs clocked either by the t generator or its own external clock source. With a defined maximum range of either +2V, +5V, or -5V to +5V, with Bias defining the tendency to stay within the range, while Spread determines the amount of possible deviation per step. One way to apply musical interest to the X generator is through the Steps control, which begins to apply musical quantization from the halfway point to its maximum position filtering out notes along the way. Cara offers a number of internal scales, including major, minor, Gamelan, and Raag scales. Alongside the three X outputs is the Y generator output, which defaults to providing full range, smooth voltages.

In the middle lies Deja Vu, which draws inspiration from Tom Whitwell's Turing Machine. Through the push buttons at the top of the module, the t and X generators may be independently locked into a loop, with definable length from one to 16 steps. The Deja Vu control itself determines the probability of a captured loop generating a new value at each clock pulse, or permutations and variations upon the loop itself. If you're looking for a distinct yet musical variety of random voltages, look no further than Cara.