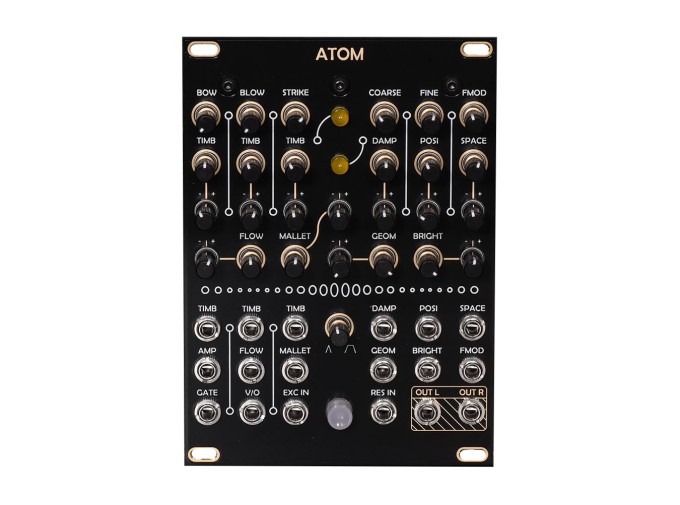 Bring the power of physical modeling to your modular rig with After Later Audio's Atom, a condensed version of the beloved Elements module by Mutable Instruments. As with the original, Atom employs a method known as modal synthesis, where virtual resonant points called modes are arranged in such a way that they emulate the sound of vibrating strings, bars, and membranes. With Atom, you have distinct control over the two primary components of modal synthesis: the Exciter—which determines how the modes are triggered, and the Resonator—which determines how the modes resonate, sustain, and sound.

The Exciter section provides three different excitation signals, inspired by the ways in which real-world instruments are played and may be blended, tweaked, and voltage-controlled for maximum interest. As expected by their names, Bow simulates the scratching noises achieved through bowing, Blow generates the sounds of wind, breath, and airflow, while Strike creates percussive impulses from mallets, plectrums, and more. Due to their potentially sustained nature, Bow and Blow may be shaped by the Contour control, which applies a variety of envelope shapes to their output. Each also offers a dedicated Timbre control, and may be activated through external trigger or gate signals, as well as with the manual Play button.

The mix of excitation signals is then passed over to the Resonator, which then transforms those streams and bursts of noise into resonant, tonal sounds. The fundamental pitch is determined by the Coarse and Fine tuning controls, with the former being quantized to semitones. Geometry has the single largest effect on the resulting timbre, morphing the arrangement of resonant modes from plates through strings and bars to bells, and Brightness defines the presence of high-frequencies. Damping defines the sustain of the resonator, and through modulation may achieve muting effects, while Position determines the point of excitation on the model with crucial influence upon the resulting harmonic structure. Finally Space is a multifunctional control, where at its minimum it will hard pan the raw Exciter and processed Resonator signals to the left and right outputs, before introducing spatialization effects by "listening" the model at different places. Past the halfway point, this control will also apply an internal reverb for ambient washes and texture.

There are few physical modeling modules out there with this level of control over its parameters, but Atom continues the thorough approach of Elements while shaving off some valuable HP.