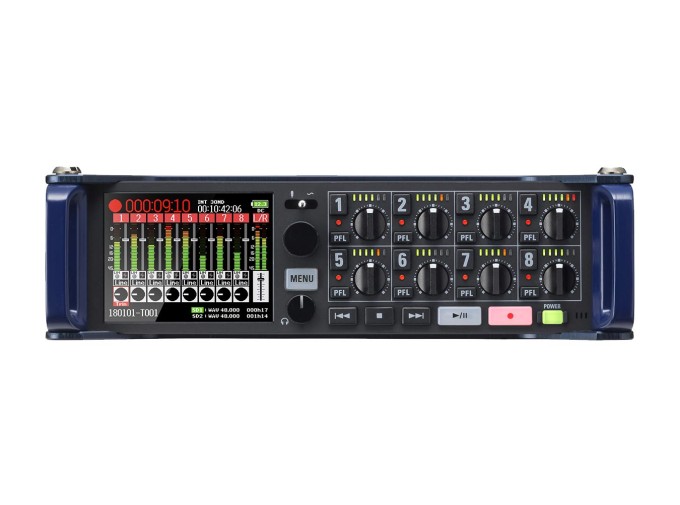 Capture stunningly hi-fi performances and surroundings in multi-mic'd arrays with Zoom's F8n Pro, an eight-channel field recorder featuring loads of functionality for pairing with video. The F8n Pro features eight high-end Neutrik XLR/TRS combo inputs for accepting any line or mic level signal, providing phantom power, loads of gain, and built-in processing to capture the perfect take. All inputs are recorded at the highest possible bit-depth, sporting 32-bit float audio files with lossless WAV formatting for pristine takes to go over in post. A secondary input utilizing Zoom's proprietary mic capsule input offers an extra stereo pair for utilizing any of the Zoom capsules for ambient or direct monitoring and capturing in XY, M/S, and even shotgun-style arrays.

The F8n Pro's recording doesn't just start at the press of the button, but actually is capturing in real time at up to six seconds ahead of engaging record, making sure you always capture the perfect take. In addition to the magnificent recording capabilities, the F8n Pro offers flexible routing for monitoring and outputting your input signals across multiple devices. The two main outputs feature professional mini-XLR jacks to work well with state of the art video cameras for easy synchronization, and the BNC timecode I/O on the opposing side makes for even more accurate synchronization thanks to its 0.2ppm Temperature Compensated Crystal Oscillator (TCXO) technology. Audio can also not only be routed out the stereo minijack Sub output, but monitoring all inputs and recording is a cinch with the dedicated 1/4" headphone output—monitor each of the eight main inputs pre-processing via the PFL button.

Easily stream and record simultaneously with both 2x2 as well as 8x4 I/O at 32-bit float as well as 96kHz over mini USB, making the F8n Pro a highly functional device for producing crystal-clear multi-track audio for live streams. Control the F8n Pro directly or from a distance with the free Control app for both iOS and Android, and additionally edit metadata like file and scene names straight from the device or app in real time. Further control over levels and processing can be even done with Zoom's expander controller, the F-Control, giving you immediate access to levels, panning, and transport control with much more finesse. With multiple power options to choose from to be mobile or stationary as well as dual memory slots for redundant recording, the Zoom F8n Pro provides a high level of recording dexterity for purely audio purposes or to pair with video.