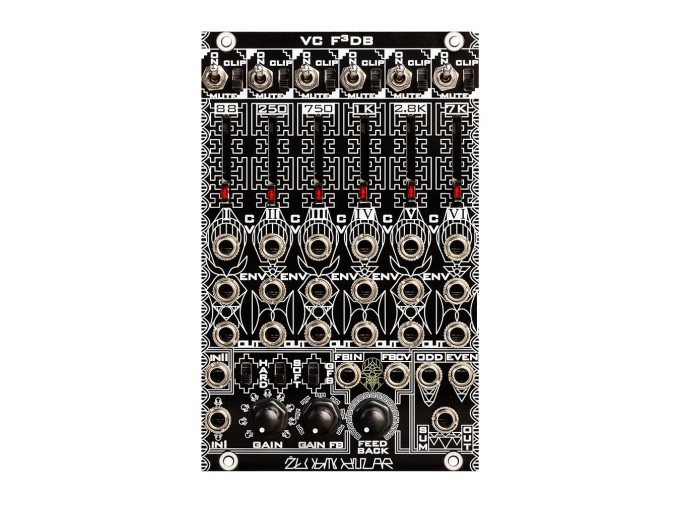 The VC F3DB is a six-band, voltage-controlled fixed filter bank that is capable of self-oscillation, wild distortion, envelope following, and much more. Designed to emphasize dissonant intervals, the frequencies roughly line up with: F2 (88Hz), B3 (250Hz), F#5 (750Hz), C6 (1kHz), F7 (2.8kHz), A8 (7kHz). Active filters with opamps give each band a robust presence. The 88hz is a low pass -24db/oct and 7k is a high pass -24db/oct, with the middle ranges being -12db/oct band pass filters all with mild resonance.

The inputs have hard and soft clipping, similar to circuits found on guitar pedals, and there is enough gain to boost line level signals. A unique feedback clipping circuit is accessed with the GFB switch which is adjusted using the Feedback knob. Capable of self-oscillation, the rate spans from LFO rate to audio rates. Each of the bands are able to be muted and clipped using the top switches. CV inputs control the VCA for each of the bands and when you approach the +8v range, they will start to overdrive. All six bands feature dedicated envelope followers and outputs letting you create interesting reactive sounds throughout your system. A second feedback knob takes the sum of all filter banks and feeds it back into the input clipping circuit, this can be controlled via CV giving it VCA functionality. Using the Feedback In, you can break the bands' normalization and feed individual frequencies into the Feedback In for high resonance, whistle tones.

Add six bands of sonic sculpting to your system with Zlob Modular's Voltage Controlled Fixed Filter Feedback Distortion Bank and patch into the essence of being.