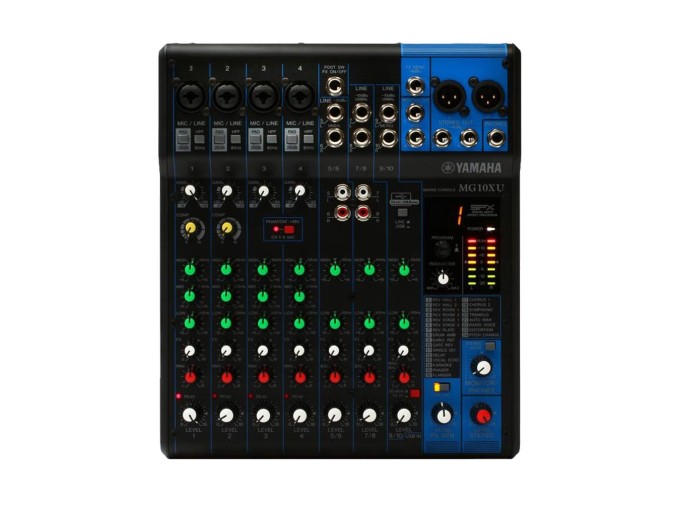 The Yamaha MG10XU is a ten-channel mixer with built in effects and USB interface that is perfect for mixing, mastering, and recording. The MG10XU use Yamaha's D-PRE mic preamps that feature inverted Darlington circuits. Additionally, Yamaha worked with a semiconductor company to create new, high-quality op-amps with a focus on audio quality. The MG10XU features ten channels, four combo XLR inputs and three stereo pairs of 1/4" inputs. Additionally, the MG10XU offers four RCA inputs (two stereo pairs) can be used in place of channels five through eight. Channels one through four also include phantom power as well as 80Hz high pass filter, gain control, and -26dB pad.

The MG10XU has 24 built-in SPX digital effects that add character and depth to your mix. Each channel has EQ control with high and low controls, while channels one through four include a control for the mid range EQ. Channels one and two feature one knob compressors, perfect for getting the right response from your mix.

The MG10XU also works as a two in two out USB audio interface that records at 24-bit 192kHz quality. It can also connect to your iPhone or iPad via the camera connection kit. The MG10XU also includes a download for Cubase's AI DAW.