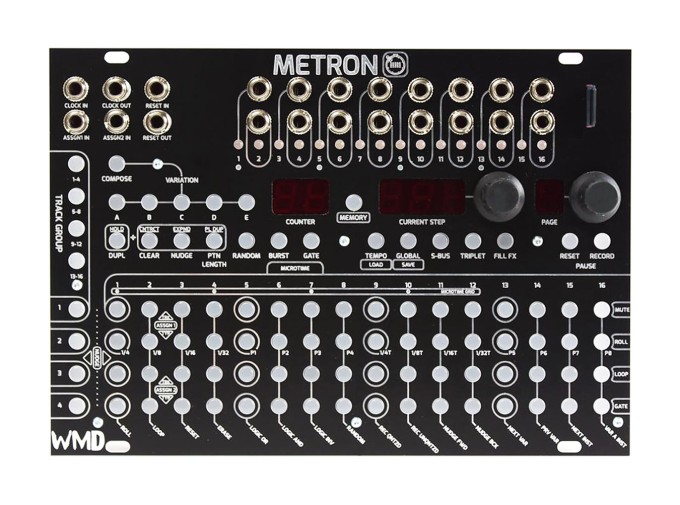 The WMD Metron is a trigger and gate sequencer that strives to be the rhythmic brain of your Eurorack system. The module features 16 sequence-able tracks that can all utilize different pattern lengths to create dense multi-metered webs of sequences.

Four tracks can be viewed at once, but this can be adjusted in order to view one full 64-step track as well. In addition to its patterns, Metron has five variations that can be applied to each pattern, all of which can be viewed and edited before the module plays them. This unlocks the ability to cue your variations, so you never have to press stop in order to edit your sequence. Metron saves its patterns on an SD card, which allows for quicker recall upon the module's power cycle—streamlining firmware updates as well as backup and file transfer. The module also includes an FX feature that is great for adding fills and variation to your sequence.

Metron also makes use of a quantized record mode. This allows you to play in your pattern using the provided grid buttons, or with an external CV source. It also uses two assignable inputs for external CV control, as well as a random pattern generator. This adds another layer of chaos into your sequences—giving you that special level of maneuverability that can only occur in controllers as dense this one.

Additionally, the module also has a MIDI Preset mode that allows you to send MIDI messages to other modules on the CV bus (via the newly-established "Select Bus" protocol). Couple all of these functions with step looping, probability per step or in a group, as well as trigger mutes and the scope of this sequencer starts to feel endless. This is a perfect solution for musicians who are looking for a sequencer that is dense enough to compose entire pieces of music, but also has enough dynamic ability for the musician to improvise through as well.

WMD's four drum modules work in tandem to produce an entire kit's worth of unique, articulate, and highly detailed percussion sounds. Chimera produces metallic sounds using a purpose-built granular engine pre-loaded with samples of everyday objects; Fracture uses a similar engine for scattered, particulate tones. Crucible is a physically-modeled cymbal module, capable of producing sound ranging from realistic ride cymbals to impossibly large metal sheets. Crater, the newest member of the WMD drum family, utilizes a combination of analog and digital components to produce huge, powerful kicks with the impact of a 909 but the body of an 808.

Tiptop's ZVERB and ECHOZ provide tailored versions of effects from their years of development on the Z-DSP multi effect module, while the Metron keeps everything moving while the MSCL glues the mix together.
WMD Metron Trigger/Gate Rhythm Sequencer (Black) Reviews
Register with :