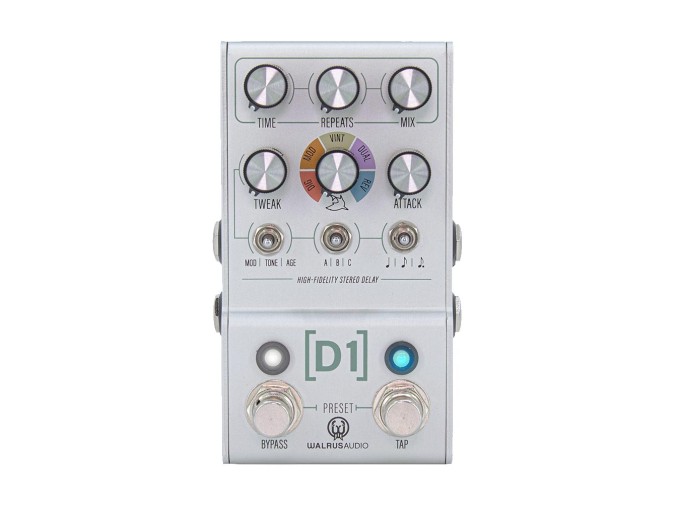 Revamped to fit among their newer Mako Series pedals, D1 V2 from Walrus Audio is a high-fidelity digital stereo delay suited to a range of applications from the vintage sound of tape echoes to lush ambient swells and distorted reversed delays. The D1 can produce nearly any style of traditional delay sound and beyond.

The tweak knob has a corresponding switch which determines the behavior of the knob, and allows it to edit all three parameters from one knob. Mod adds LFO modulation, tone affects the timbre of the repeats and can be used to make a sound brighter or darker, and age adds grit and ranges from warm overdrive to bit crushed lo-fi delay madness. The Attack control applies an attack envelope to the delay trails and allows for lush and dreamy ambience. The D1 features two inputs and outputs and can be used in any combination of mono and stereo operation. A tap tempo footswitch can be used to set the tempo of the delay. The division switch selects the division of the tempo and can be quarter note, eighth note, or dotted eight note. This new version of the D1 also adds panning and Haas stereo imaging, to add further depth to youe delay sounds.

There are nine on-board presets which can be saved and recalled easily, with 128 presets available via MIDI. MIDI can also be used to change the parameters and clock the delay externally to keep it in time with your other gear. The MIDI out also serves as a MIDI thru port, useful for clocking multiple pedals in your pedal chain at the same time. There's also a USB port for updating the pedal's firmware down the road. The D1 is a great addition to your pedal setup, offering fantastic tones, tap tempo with selectable divisions, and deep MIDI integration.