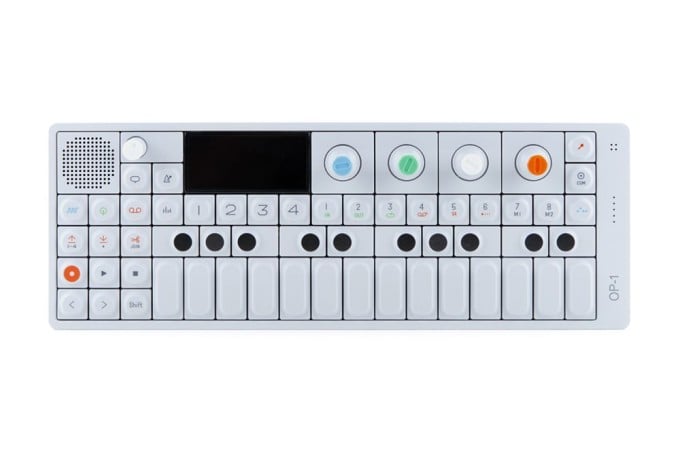 Since it was introduced over ten years ago, Teenage Engineering's one-of-a-kind OP-1 continues to be a portable source of inspiration for electronic music makers around the world. Just about everything we've learned to expect from the Swedish design company originated here—charming and compact design combined with intuitive and expressive instruments, samplers, and effects. But despite its clean and yet playful appearance, the OP-1 fills an abundance of roles from sonic sketchpad to all-in-one production environment, and it can easily do any of those things anywhere.

Although the OP-1 wears many hats, its workflow revolves around four main modes designed to tap into different parts of your creative soul: Synthesizer, Drum, Tape, and Mixer. Everything is accessible through its multi-mode interface, where the blue, green, white, and orange encoders jump to different parameters on every page. And thanks to the multifarious and informative visuals on the vibrant display, the resulting changes from twisting knobs and loading up a new sound are immediately clear to both your eyes and, most importantly, your ears.

Exploring synthesis can be an intimidating journey, but not only has Teenage Engineering gathered impressive and versatile synthesizer engines for the OP-1, they've also managed to encapsulate them in a way that's easy to use and instantly gratifying. Eleven synthesis engines cover an impressive spectrum of sonic color, from nostalgic, DX7-esque FM to a DNA synthesis algorithm unique to each individual OP-1. For sounds that can't be synthesized, there's also a melodic sampler, well suited for bringing in sounds from the outside world via pre-loaded audio files or captured from the built-in mic, line input, or FM radio. In addition to the engines themselves, sounds are further shapeable with an ADSR envelope, one of seven different effects, and an LFO, all of which are capable of adding life and excitement to your sounds. And truly in line with the OP-1's exploratory nature, engines can be changed while keeping the effects and modulations constant, or totally changed on a dime by recalling a full sound preset.

Compared to the synthesis algorithms, which are primarily suited for melody and harmony, the Drum mode is the place to go for expressing rhythmic ideas. The signal flow here is similar to the synthesizer mode but slightly tweaked for improved performance with percussive sounds. Notably, there are just two engines: the drum sampler, which allows kits to be generated from 12-second audio files and mapped across the keyboard, and the D-box, a dual-oscillator drum synthesizer. Rather than offering an ADSR, the Dynamic envelope is perfectly equipped for sculpting transients and short sounds in the context of a kit, but the LFO and effect options remain intact for twisting the aural identity of your rhythms into something entirely different.

While manually playing notes on the keys is one way to compose musical ideas, the OP-1 also happens to be loaded up with several different types of sequencers that provide compelling, alternative methods of note generation. Rather than notes being played on a direct, per-key basis, these sequencers take input from the keyboard and process or combine note data in some way (sometimes considering the global tempo), and then pass it on to the currently loaded synth or drum sound. More traditional modes like Arpeggio and Pattern draw from electronic music's legacy of hardware and clip-based workflows, but others like Tombola and Sketch venture into more experimental and generative music territories, leaving plenty of room for the player or producer to enhance their musical identity and expression with what the OP-1 has to offer. And it doesn't stop there, because the sequencers can be routed to the OP-1's USB port for playing other instruments via MIDI.

With all that it has to offer for sound and note creation, the synergy of the OP-1's constituents come together and shine with the use of the Tape section. In practice, the OP-1's Tape behaves much like a real four-track cassette deck, but with the navigational and functional advantages of working with digital audio. Perhaps best of all, Tape borrows the tempo-synced conveniences of DAW-based production, providing musically useful divisions of bars and musical segments that perfectly line up with the sequencers and metronome. And sure, while the Tape is an effective way to sketch compositions, its practical uses are much broader—layer, trim, and resample sounds back into the drum or synth engines, print all four tracks to a single stereo audio file with the Album feature, or spice up arrangements with loops, Tape Tricks, and so much more.

After the Tape section, tracks are summed together in the Mixer, and it's here that all of the OP-1's sounds receive their final polish. Each track gets independent level and panning controls, before passing through a global three-band EQ, and on to a stereo effect functionally identical to those found on the Synthesizer and Drum instruments. Finally, before audio leaves the OP-1 and travels to your ears, an end-of-chain Drive applies distortion and compression to glue everything together and give your music a little bit of that extra magic.

Amazingly, there's still so much more that the OP-1 can do, and perhaps it's this incredible versatility and uniquely captivating design that keep it in the hands of so many people, even after ten years on the market. Simply put, there's nothing like the OP-1, because while you might be able to find other things that do some of what it can do, the experience of using it makes it truly an instrument greater than the sum of its parts.

The contest is open to enter until the end of October 2019 and is open to US residents.

Join us for a walkthrough of some routing, unique signal manipulation, as well as weird and whacky tones!