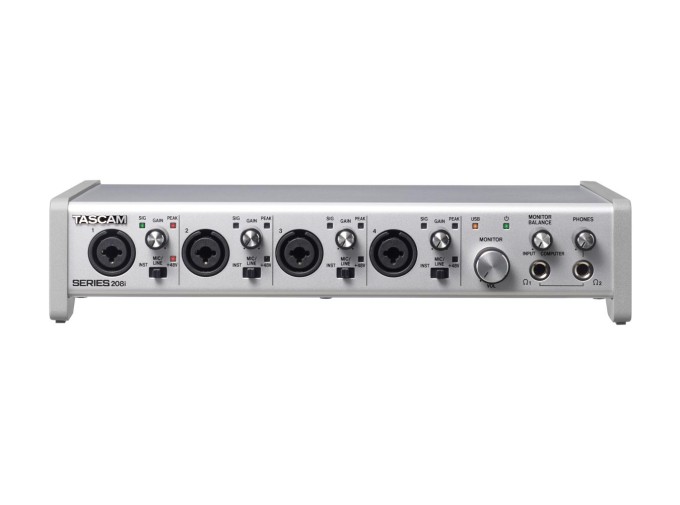 The Tascam Series 208i is a USB audio interface with both analog and digital inputs that's perfect for small bands, podcasting, or as part of a larger studio. It includes four XLR/TRS inputs with Tascam's high performance Ultra-HDDA (High Definition Discrete Architecture) preamps with +48V phantom power. In addition, two optical S/MUX inputs allow you to connect up to 16 additional inputs for a total of 20. With resolution up to 24-bit/192kHz, you'll capture every nuance of your performance in stunning detail.

The monitoring can be adjusting between the input and computer, allowing for latency-free monitoring on its two headphone outputs. Eight 1/4" balanced outputs are available for monitoring in up to 7.1 surround sound audio, or for routing sound to external processors. Any input, analog, optical, or USB can be assigned to any of the output ports.

Add compression, EQ, and reverb to your tracks with the built-in effects independent of your DAW. The companion software from Tascam allows you to control faders, effects, routing, and phase inversion. In addition, the Series 208i comes with a bundle of software including Cubase LE, AmpliTube, Neutron Elements, and T-RackS. Connect to your MIDI devices with both MIDI input and output. Word clock input and output allows you to sync with the rest of your studio equipment. The 208i has a robust set of features and the ability to expand its functionality beyond what it first seems, making it a powerful studio tool.