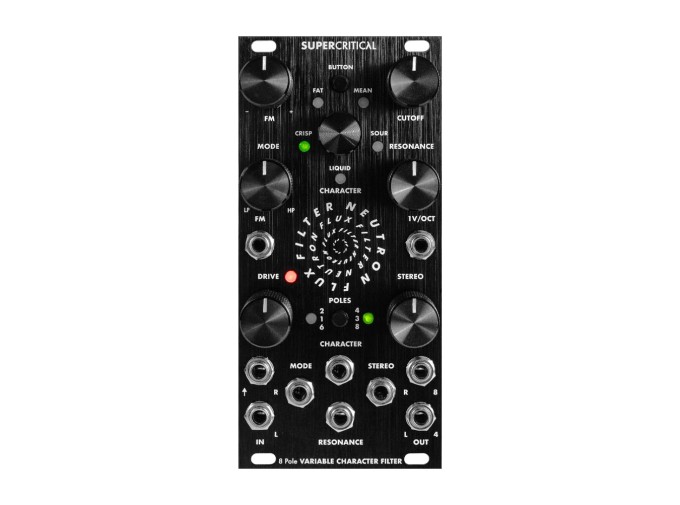 Perhaps the closest thing to nuclear fusion available in a Eurorack module, Neutron Flux is a stereo-capable, digitally-controlled analog filter from Supercritical Synthesizers. The entirety of the signal path is fully analog, but thanks to its digital control capabilities, synthesists are able to take many of the basic elements of analog filters, and have the power to meld, break apart, and recombine the various parameters into a wide range of new filter architectures.

At the core of Neutron Flux lie two analog, 4-pole filter cores, which may be used for stereo applications or chained together for a stacked 8-pole mono filter. Where Neutron Flux further diverges from any analog filter you've previously known is the digital control over its filter slope, and the circuit components which were traditionally fixed in operation and give a filter its character are now variable, unlocking the potential to jump between many iconic filter topographies at an instant. Five filter Character settings are available from the start, providing everything from ladder filters, state-variable filters, and a few other interesting models. Supercritical also promises a later firmware update to offer user banks of filter settings, further cracking open the Neutron Flux to be capable of producing nearly any filter imaginable in the analog realm.

Filtering isn't all this module can do. Holding down the Poles button will engage a +20dB overdrive circuit, meaning that various settings of the Drive knob range from clean, through lighter saturation into full-on hard clipping. Thanks to its malleable topology, in some Character modes the overdrive can be enabled for individual cores, drastically changing the personality of any given mode. Additionally, like many filters the Neutron Flux is capable of self-oscillating when the Resonance is cranked up, and CV inputs for 1V/oct tracking and FM are present for wild sound generation potential.

Whether looking for a new filtering and distortion processing tool for your productions, or exploring the vast filter alchemy potential perfectly suited for the Eurorack realm, Neutron Flux contains nearly limitless sonic energy waiting to be unleashed.