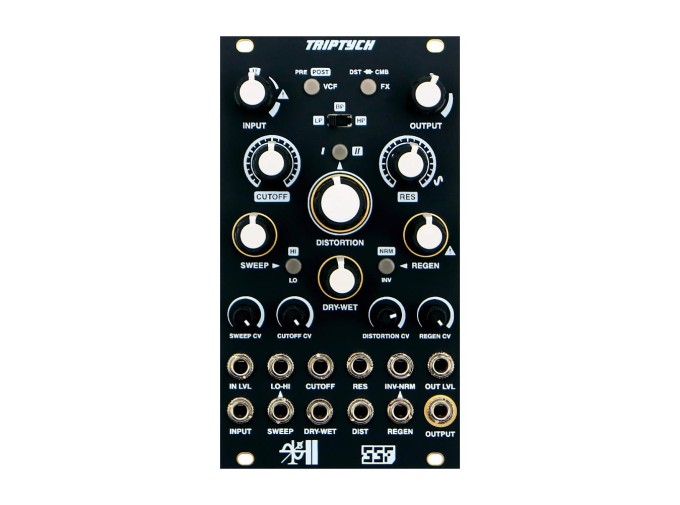 The signal chain starts with an input VCA with saturation which begins to color the input signal with both a dedicated level offset and voltage control. The voltage-controlled distortion section features two unique distortion modes. The two modes are Fold and Clip and Re-fractal Fold and Clip. Fold and Clip saturates the input signal before folding it over onto itself. The unfolded portion of the resulting waveform increases gain at a high rate and then hard clips. Re-Fractal Fold and Clip begins with saturation and then a gentle folding. From there, a refractory peak forms and rebounds into the opposite direction. The gain increases from there and hard clips. This second distortion imparts more gain than the first. The input VCA section determines the overall depth and effect of the distortion, and of course, both of the hard clipping modes available on the distortion depends on the symmetry of the incoming waveform.

Triptych's multi-mode filter features a -12dB/oct cutoff slope with selectable low pass, band pass, and high pass modes. Get CV control over both the cutoff frequency and resonance, which begins to self-oscillate at high settings. The VCF features a switch to select its position in the signal chain. PRE places the filter at the beginning of the signal path after the input VCA, while POST will put the VCF last in the chain before the output VCA.

The VC Flange-Comb section provides perhaps the most expressive effect of the trio, with the largest potential for signal destruction. It does everything from flanging and comb filtering to fast delays that work in tandem with the distortion for aggressive and powerful sounds. Most BBD delays feature a low pass filter in the feedback loop to filter out unwanted noise. Triptych intentionally eschews this in favor of preserving clock noise, and even adds a resonant peak to enhance high-frequency content. The delay clock, controlled by the Sweep knob features two frequency modes, Hi and Lo. Lo provides a wider range of delay effects with slower clock speeds, while Hi includes a broader spectrum of comb filtering. Introduce delay-line feedback with the Regen control, which at high settings pushes into self-oscillation territory. This includes both normal and inverted feedback, which each affects the signal in its own way. Mix the flange-comb section in with the previous sections of the signal path with the dry/wet control. Additionally, you can either route the distortion into the flange-comb or go from the flange-comb into the distortion. Finally, the signal passes into an output VCA to control the final amplitude. This final output ranges up to 23V peak to peak, potentially leading to intense clipping further down the signal chain.

Triptych represents three elements coming together through the collaboration of three artists. It provides a litany of aggressive, distorted, and characterful sounds that meld together for a wide sonic palette that leaves your eardrums screaming…for more.