Item#
N13-5677
$999.00
Add to Wishlist
Special order delivery times vary. Note that special orders may not be returned or cancelled. Feel free to reach out for more info!
Skip to the end of the images gallery 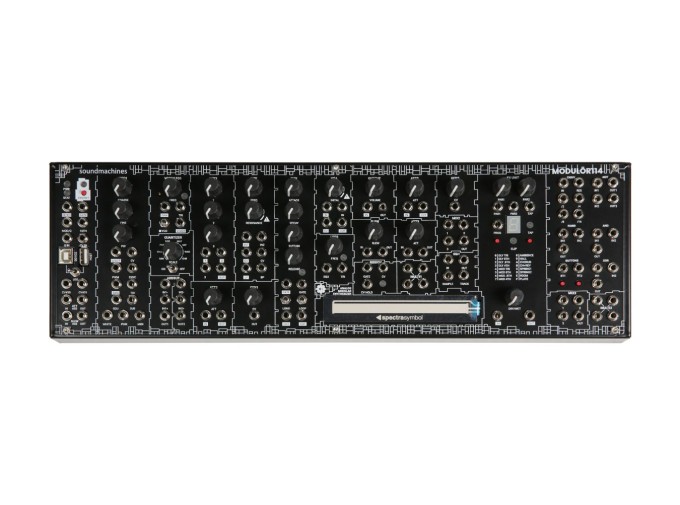 The Soundmachines Modulor114 is a self-contained modular synthesizer housed in an 84HP Eurorack panel mounted inside a custom case that can be powered in one of three ways: via USB, power adaptor, or Eurorack power cable. The synthesizer is compatible with all Eurorack format modules, but is a beast in its own right. A built-in USB/MIDI interface ensures optimal control with an external keyboard or sequencer. Other tactile controls include a ribbon controller and straightforward front panel interface with a convenient layout.

The USB/MIDI section also converts MIDI to CV, while subsequent modules include an oscillator with PWM functionality, noise, and both a sync and sub-oscillator. There’s also a second oscillator that can be assigned to either VCO or LFO duties. Beyond that, the Modulor114’s built-in quantizer features selectable scales and can be used alongside the ribbon controller, making it a powerful performance tool.

In terms of filtering, the VCF features both low- and bandpass outputs and is capable of self-oscillation with enough resonance. There’s also a VCA and ADSR section, the latter of which can be looped for use as a square or triangle LFO. Aside from the meat, there are also dozens of utilities spread across the synthesizer, such as sample & hold, slew limiters, multiples, and attenuators. If all that wasn’t enough, the Modulor114 boasts a powerful DSP effects section that can be tempo synced for advanced rhythmic patterns.