The recent release of Moog's Mavis has given us reason to take a closer look at Moog's current lineup—and frankly, it's pretty incredible to see everything that they're currently making. The Etherwave Theremin and Claravox Centennial are some of the most sophisticated theremins to date. The Grandmother and Matriarch provide keyboardists a highly-flexible means of exploring modular signal routing. The Mavis, DFAM, Mother-32, and Subharmonicon are all amazing entry points into the world of modular synthesis, and the Moog One is quite possibly the most advanced analog keyboard synthesizer of all time.

And then there's the Subsequent 25 and Subsequent 37. While we love a good modular or semi-modular synthesizer, the Subsequent synths are arguably some of the best synthesizers for keyboard performers, providing a wealth of true analog sounds, the immediacy of preset recall, and an insane level of programmability. If you're a keyboardist looking for a synth for leads, bass lines, and all-around sonic experimentation, don't sleep on these: they're as powerful as they come, and they contain a number of distinct features and sounds that you'll only get from a Moog.

Luckily, our friend Nicholas Semrad recently came by our studio to show off the Subsequent 37, for which he recently developed a stunning bank of presets. For all of you Sub 37/Subsequent 37 owners out there, you can access Nicholas's sounds here...and for those of you who are trying to figure out what the Subsequent 37 is all about, check out Nicholas's video above, and feel free to read on for more perspective on this amazing instrument.

Prior to the Subsequent: Moog in the 21st Century

As you likely know, Moog has been making synthesizers for nearly 60 years—from their vintage modular systems to genre-defining instruments like the Minimoog, polysynths like the Memorymoog, and much more. But as you probably also know, analog synthesizers met a significant decline in the 1980s and 1990s, with digital designs quickly overtaking the marketplace. As such, Moog went a number of years without making synthesizers...but eventually, as Bob Moog regained the right to use the Moog Music name, he led the charge into a new millennium with a no-holds-barred new analog synth design: the Minimoog Voyager. 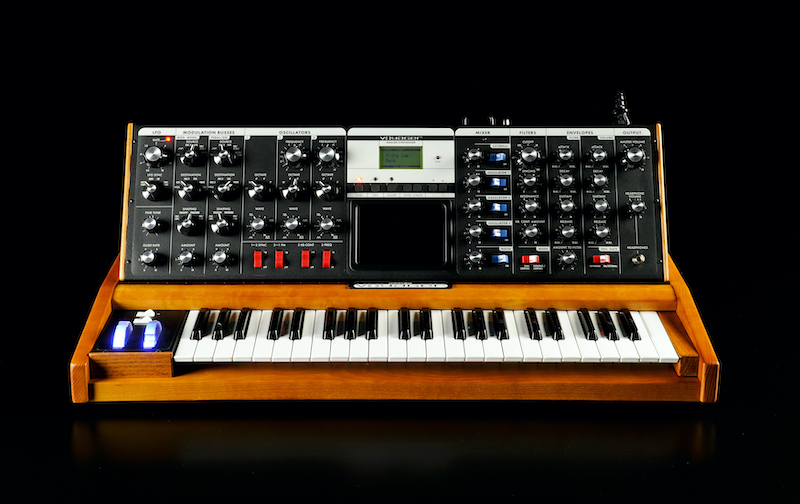 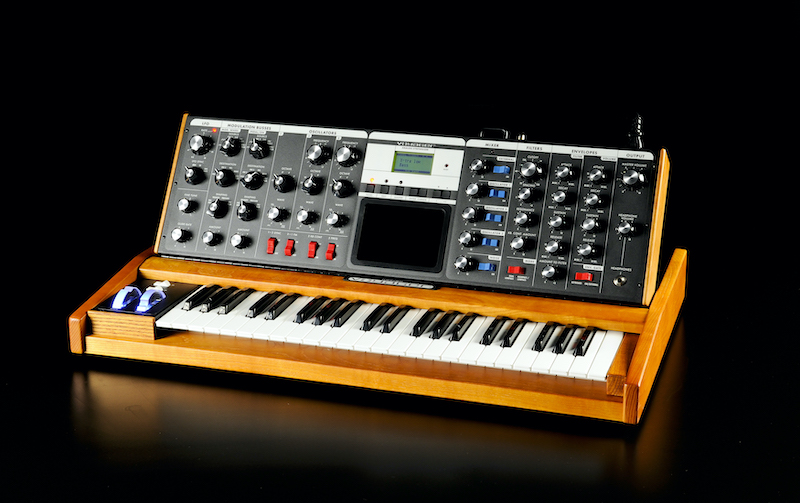 Released in 2002, the Voyager was designed to be a true 21st-century re-imagining of the original Minimoog Model D, adding MIDI control, patch storage/recall, a powerful modulation section, and new performance control options (including keyboard aftertouch and a three-dimensional touch pad on the front panel). The Voyager became the synth to have—it was the first Moog monosynth in ages, and provided serious musicians with access to sounds that had become increasingly difficult to find. However, the boutique nature of the Voyager meant that it was out of reach for many musicians; and as such, Moog sought to create a condensed alternative that could offer the Moog sound to even more working musicians. Thus, in 2006, the Little Phatty was born. 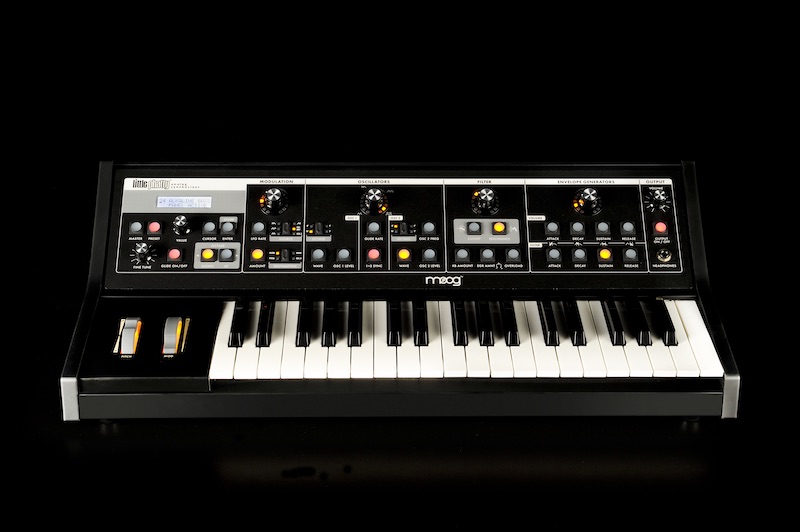 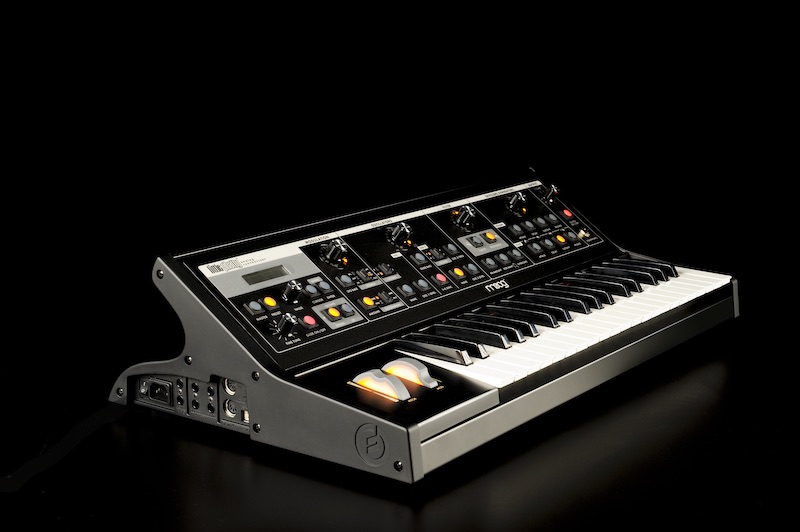 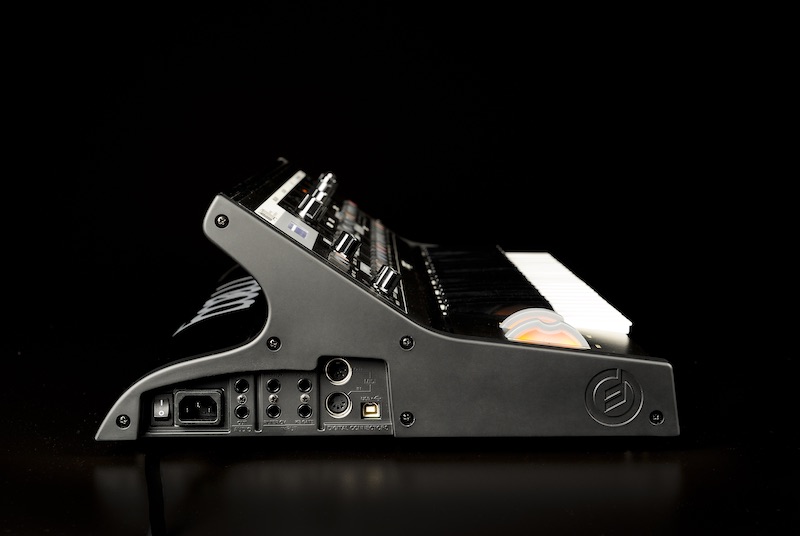 The Little Phatty became an iconic synth in its own right: its stripped-down user interface provided instantaneous access to all the most important performance parameters, and its all-new design featured a striking angled front panel and contoured rear panel design. Much like the hinged/angled panel of the Minimoog Model D and Voyager, the Little Phatty's contour became an image that any keyboardist could instantly identify. Happily, its sound was unmistakeable as well: it was a considerably more affordable alternative that gave musicians access to the Moog sound while dispensing of some of the extended features and design complexities of the Voyager.

The Little Phatty eventually was repackaged as Slim Phatty, a 19" rack module, and even after that, the Sub Phatty came along—an even smaller, more affordable synth with a distinctly Phatty-like design, specifically tailored for use as a bass synth, and adding a new drive circuit for extended sonic range. Eventually, this design evolved further with the Sub 37, and now, the Subsequent 25 and Subsequent 37 represent the newest iteration of the Phatty legacy—a legacy that itself is deeply entwined with the Minimoog and Voyager. So, that bit of history behind us, let's turn our focus to the Subsequent 37, and what makes it so special.

The Subsequent 37 is, in many respects, Moog's most sophisticated monosynth to date. It offers two oscillators, a suboscillator, noise source, integrated mixer feedback path, a variable-slope filter, a multidrive circuit, two looping envelope generators, two mod busses with dedicated multi-shape LFOs, arpeggiator, step sequencer, and extensive MIDI/CV control options. The 37-note keyboard is both velocity and pressure-sensitive, making it an expressive instrument perfect for performing musicians. And of course, it contains full patch memory, with sixteen banks of sixteen patches available...making it easy to recall your favorite sounds at a moment's notice. 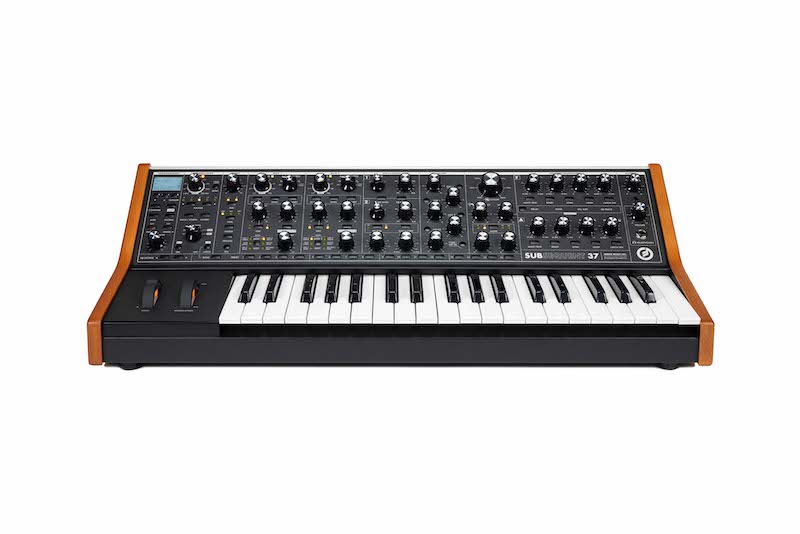 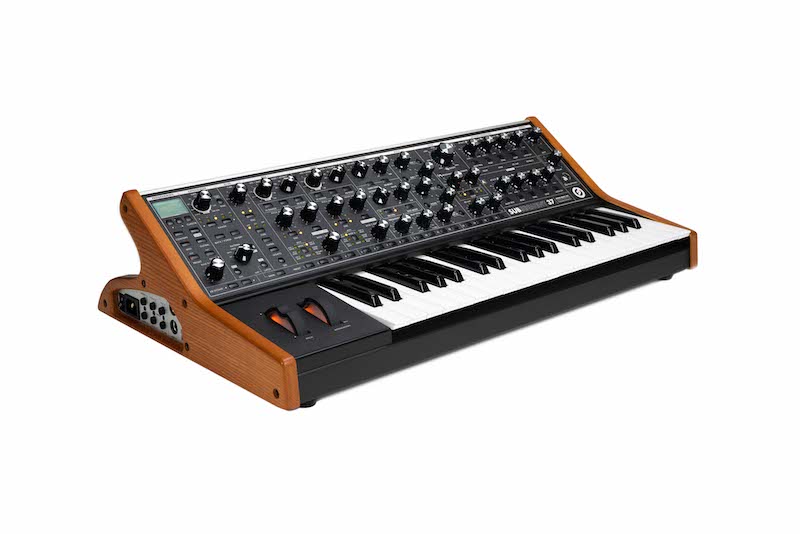 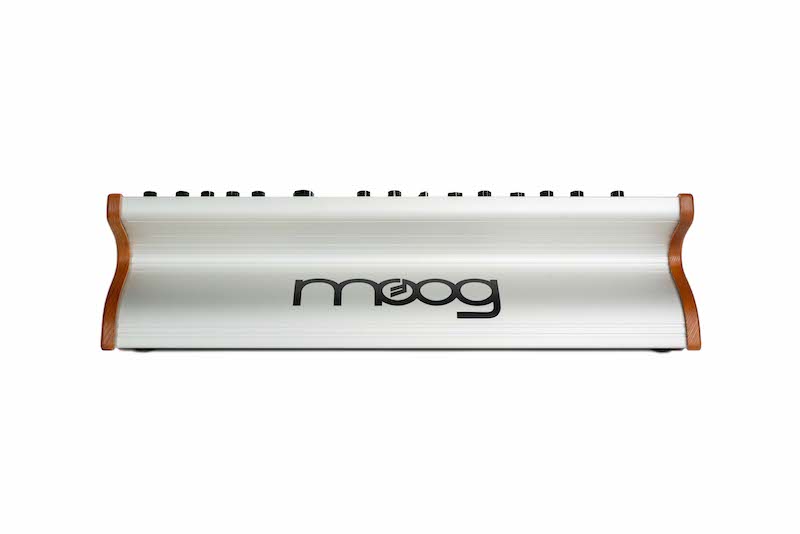 The two oscillators offer an octave switch and a continuous waveshape blend control, which allows for everything from shape morphing to pulse width modulation. The second oscillator can optionally be decoupled from the keyboard, and offers a continuous frequency and "beat freq" control, which allow for differently-parameterized shifts from the main oscillator's pitch for stacked intervals and subtly pulsating textures.

Notably, the oscillators also offer a "duo mode," accessible via a front-panel switch; when engaged, the oscillators can be independently addressed from the keyboard. Though they both share the same articulative structure (filter, amplifier, and envelopes), this crude form of polyphony makes it possible to create simple harmonies and pseudo-duophonic textures. The oscillators can also be hard synced, permitting classic synth pop leads, razor-sharp bass tones, and more. Glide can be assigned to each oscillator independently, and offers a number of options for operation, including a clever "gated" glide mode which only utilizes glide when successive keypresses overlap with one another.

The mixer section features dedicated mute switches and level controls for oscillator one, a suboscillator based on oscillator one's pitch, oscillator two, a noise source, and the external audio input. With nothing patched to the external input, this final level control injects feedback from the instrument's output back into the mixer—recreating a trick that Minimoog users have been enjoying for decades, turning even the simplest of synth sounds into gnarly, distorted drones and explosive bass tones. It's worth noting that the mixer, which might seem dull on paper, is actually a powerful tool in the context of the entire instrument, as it's the most focused area for gain staging. Providing fine-tuned control of all of the instrument's sound sources, it's more than just a set of level controls: it's a way of determining the response of the filter itself.

As in many Moog instruments, the filter is one of the primary highlights of the Subsequent 37. It's a classic Moog ladder filter with some twists. It allows for anywhere from one-pole to four-pole operation, accessed via front-panel switch. It also features Moog's now-famous Multidrive circuit, a finely-tuned and highly nuanced control for introduction additional layers of distortion. Combined with the external feedback option, this allows for even more opportunity for saturation and thickening. And again, I'll state that the mixer plays a huge role in determining the filter's sound: with careful gain staging, you can get everything from silky smooth leads to absolutely crushing drones and walls of modulated noise. Add some resonance and you're in liquid snarl city. 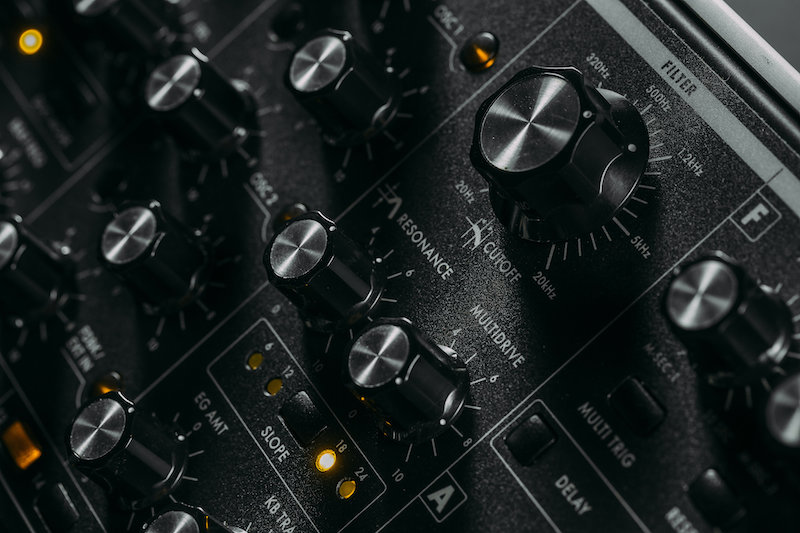 The two envelopes pack astonishing modulation power into a deceptively simple set of controls. Each is a DAHDSR envelope—with dedicated controls for attack, decay, sustain, and release, and second-level controls for delay, hold, velocity amount, and keyboard tracking. They can optionally loop as well, behaving like highly shapeable LFO-like modulators. This can be great for freeing up your mod busses to handle non-filter/non-amplifier parameters...but it can also be a way of simply getting even weirder with your modulation altogether.

Speaking of the modulation busses...they're amazing. Each mod buss features a source selection switch, dedicated Pitch Amount and Filter Amount controls, and an additional destination selection with modulation amount control. The source for each buss can be a dedicated per-buss LFO (with triangle, square, saw, ramp, and stepped random shapes), the filter envelope, or any of a number of programmable sources ranging from CV inputs to performance controls and more. The LFOs can work in low-frequency or high-frequency ranges (great for audio-rate modulation tricks), can sync to your defined tempo, and can be made to reset with each keypress for situations where modulation synchronization is critical. You can modulate everything from the oscillators' wave shapes to the noise level, LFO rate, and much more. 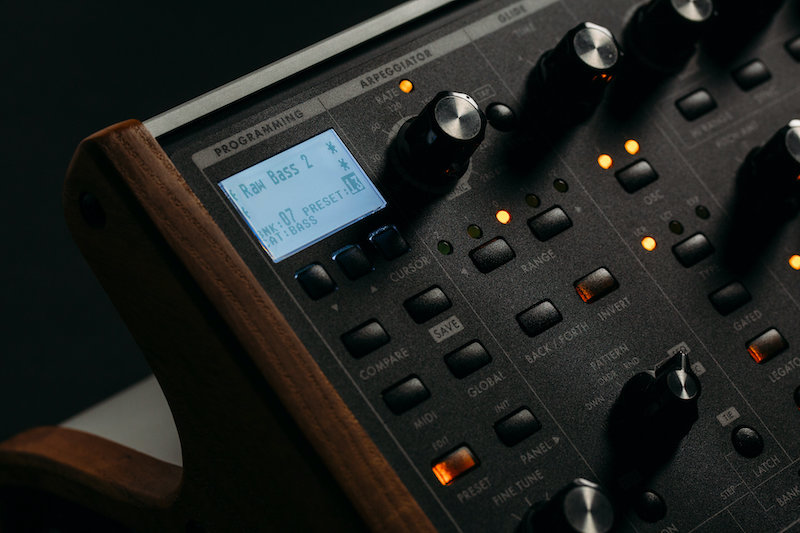 Subsequent 37 also features a built-in step sequencer, with up to 64 steps of sequencing. Notes are entered in SH-101 fashion, with the option of rests and ties, and the sequencer even works in Duo mode, allowing you to program simple harmonizations and counterpoint. Step editing allows for modification of your pattern, permitting everything from note editing, retroactive entering of rests and ties, and definition of a per-step Seq Mod value, which can be assigned to a number of parameters throughout the synth. You can also add ratcheting, rotate your sequence, and much more. The sequencer, of course, can be used in conjunction with the quite flexible built-in arpeggiator as well...leading to evolving cascades of notes and spastic animations impossible to achieve with a keyboard alone.

Of course, there's much more to Subsequent 37 than just this: it has extensive MIDI implementation, allowing external NRPN and CC control of all critical parameters. You can use the filter and multidrive to process external audio. It has CV/Gate I/O, making it easy to integrate with modular gear or CV-equipped effect pedals; and of course, the number of sonic options permitted by exploring combinations of individual features is astounding. As with any synthesizer, the joy of exploration is in discovering how its individual components can relate to one another—and with such deep, detailed, and customizable options for each individual subsection, the Subsequent 37 ensures years of exploration and experimentation for even the most experienced synthesists.

Subsequent 37: Still the Only Monosynth You Need

At the end of the day, the Subsequent 37 is a surprisingly powerful instrument; now even years beyond its release, its feature set seems to include everything that a monophonic keyboard synth should and more. If you're a keyboardist looking for classic Moog lead and bass sounds, you'll get them in droves...but you'll get so much more as well.

Subsequent 37 excels at duophonic harmonies, gritty feedback and distorted textures, flurries of spastic modulation, and compelling sequences. You'll be able to achieve smooth, expressive leads, powerful funk bass, and everything in between. However, you'll also find that the range of possibilities outside those of a typical monosynth will push your sound design into new directions. In no time, you'll discover that there's a world of expressive potential waiting to be unlocked—and you'll start to make sounds that you've never heard from a Moog or any other synthesizer. With this much potential, it's easy to develop your own unique sonic signature: the instrument is simply a tool for exploring your creativity, and quite a capable one.

Don't forget—you can access Nicholas Semrad's custom Subsequent 37 patches here; they're a great place to start your explorations of this insanely deep instrument, sure to drop you straight in the middle of blissful, artfully-crafted sound worlds. Smooth leads and growling basses to staggering walls of sound...it's all there! 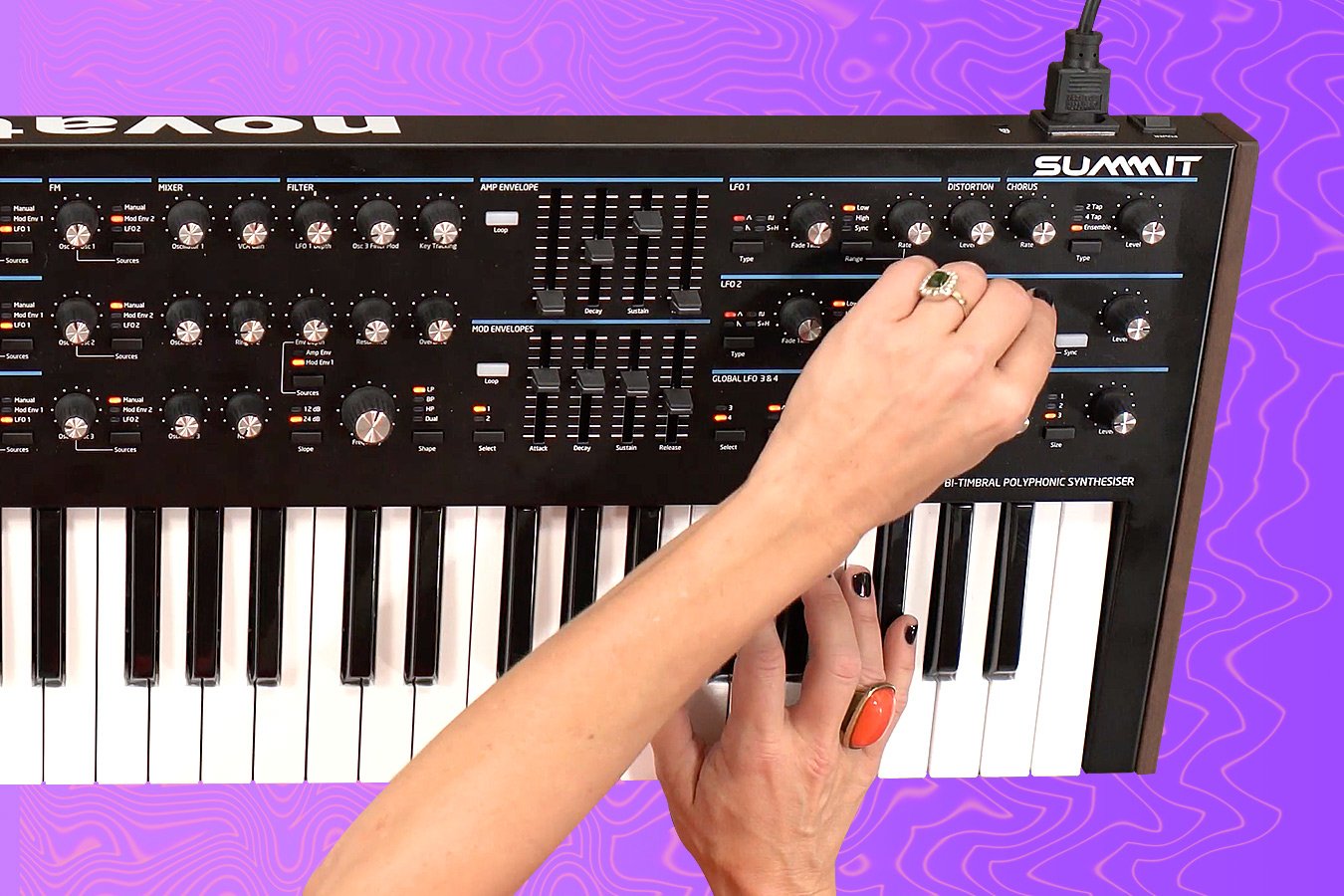 Still One of the Best Keyboard Synths of 2022 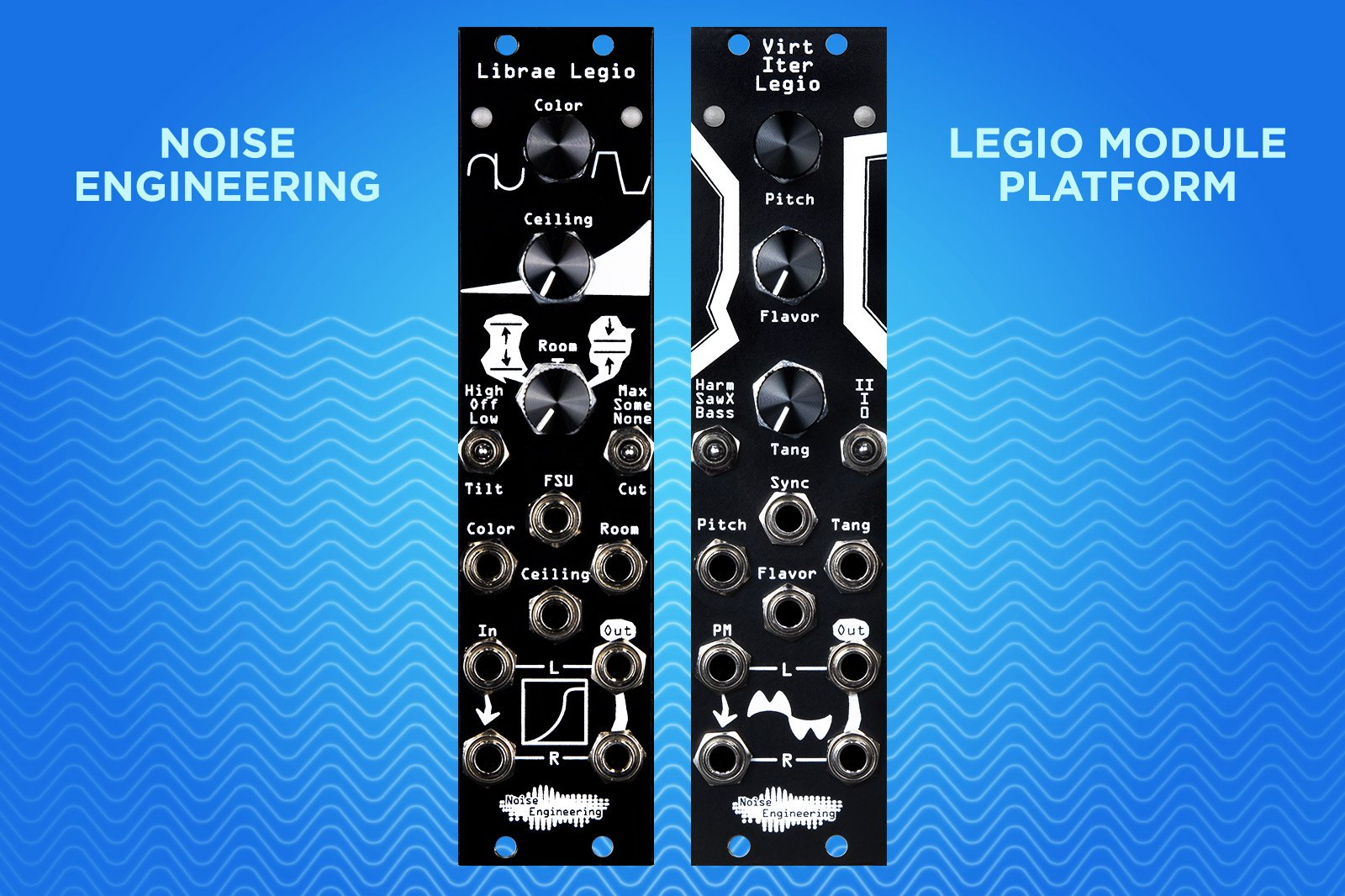 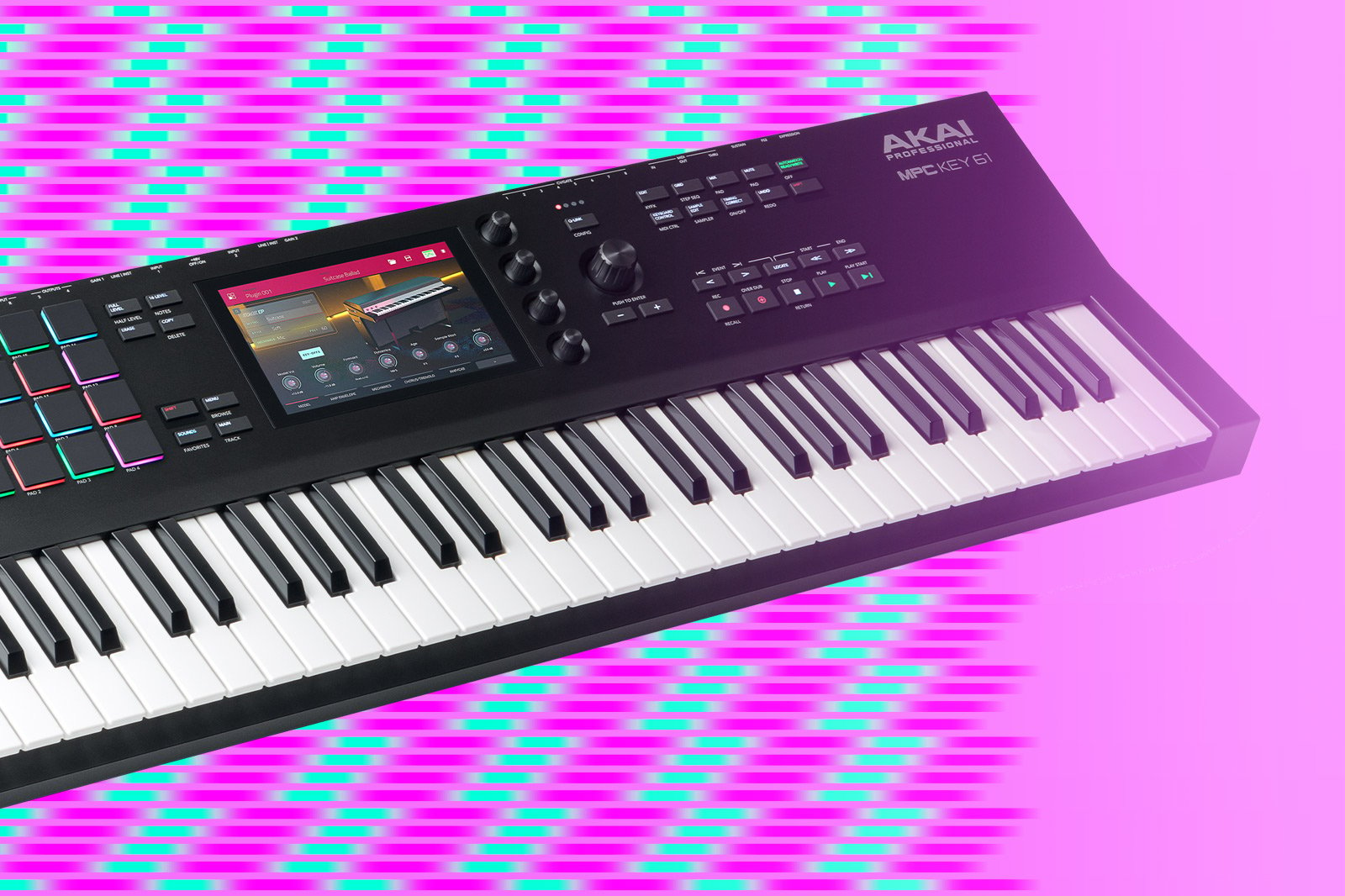 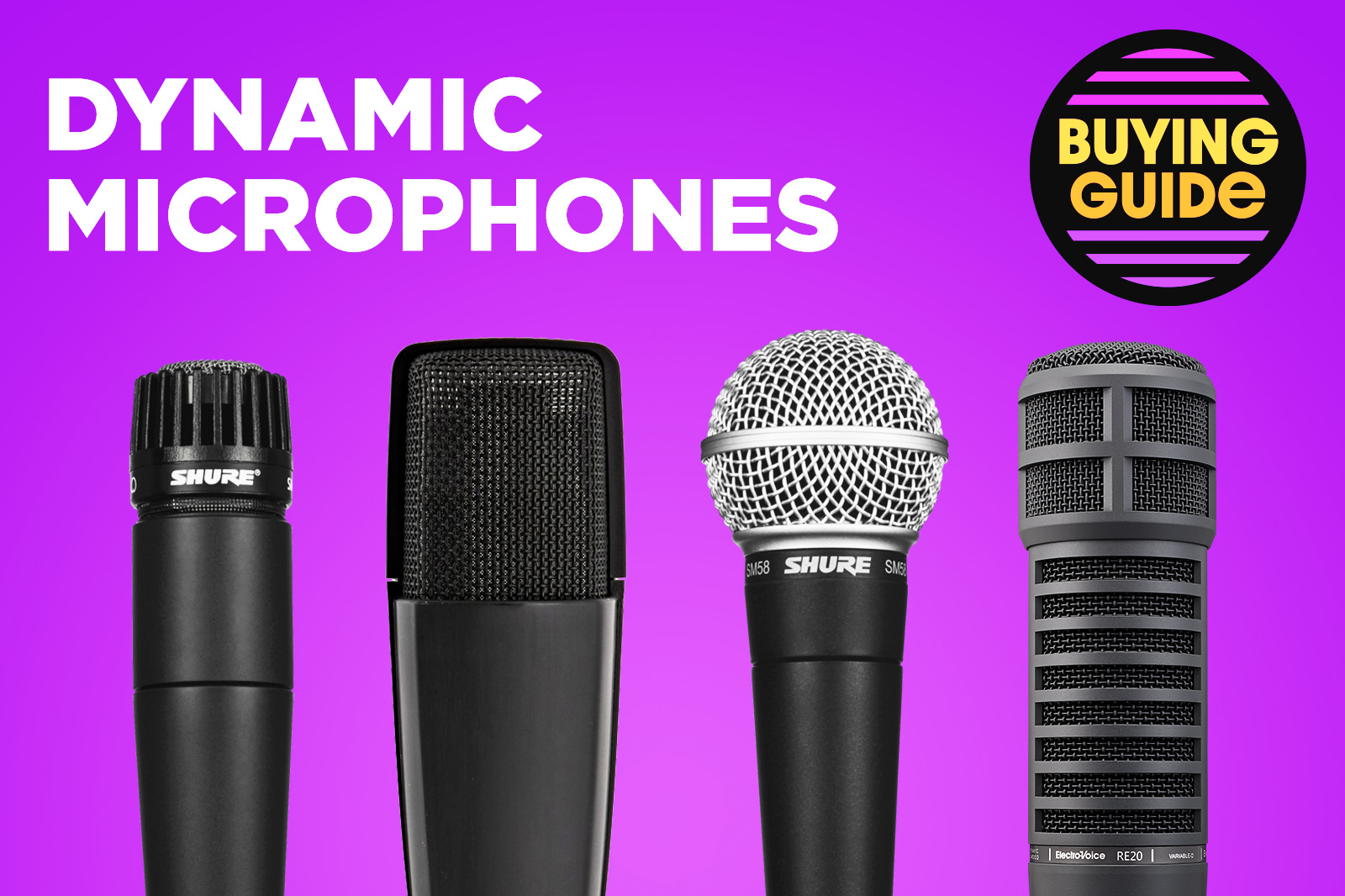 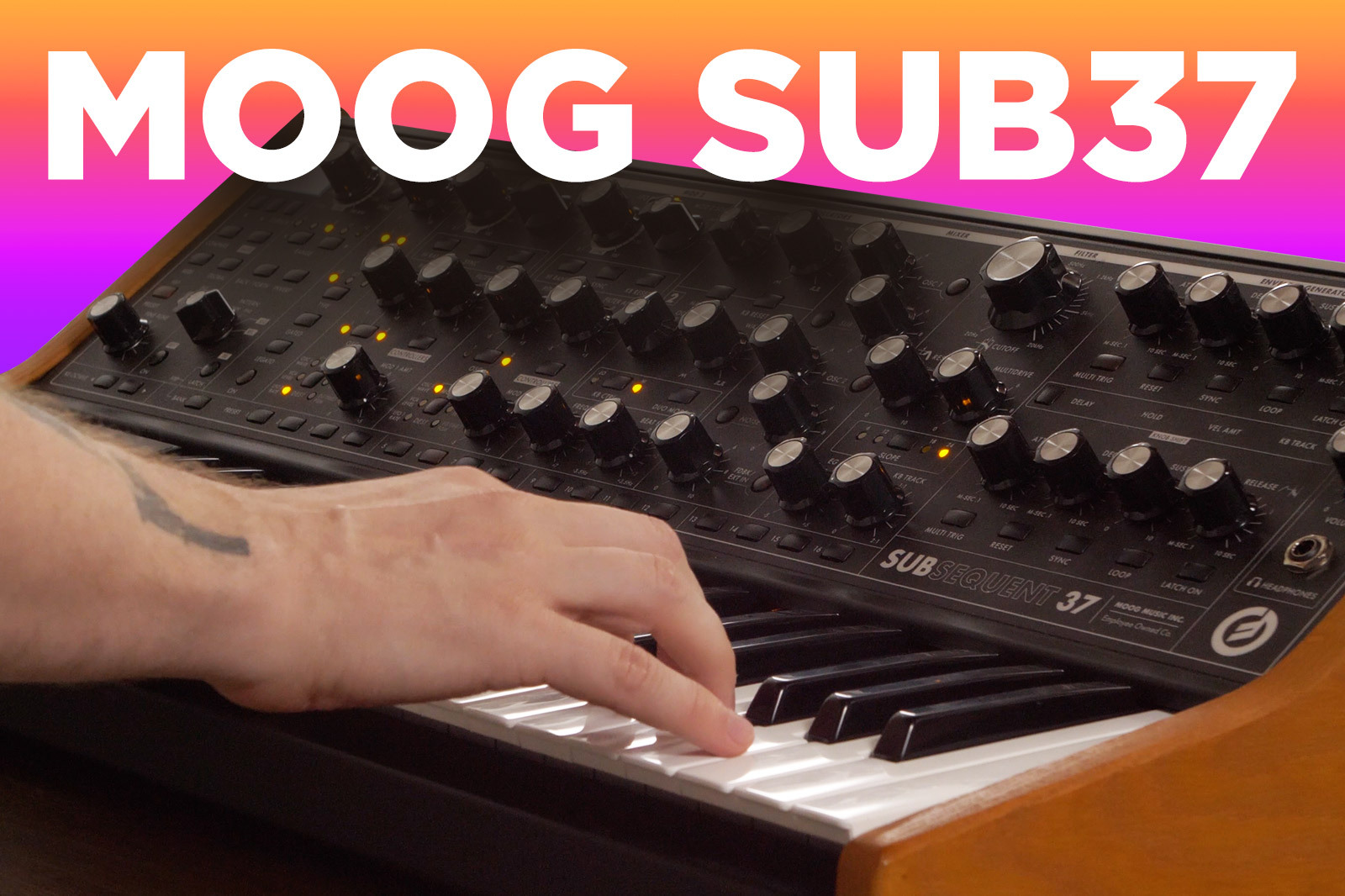 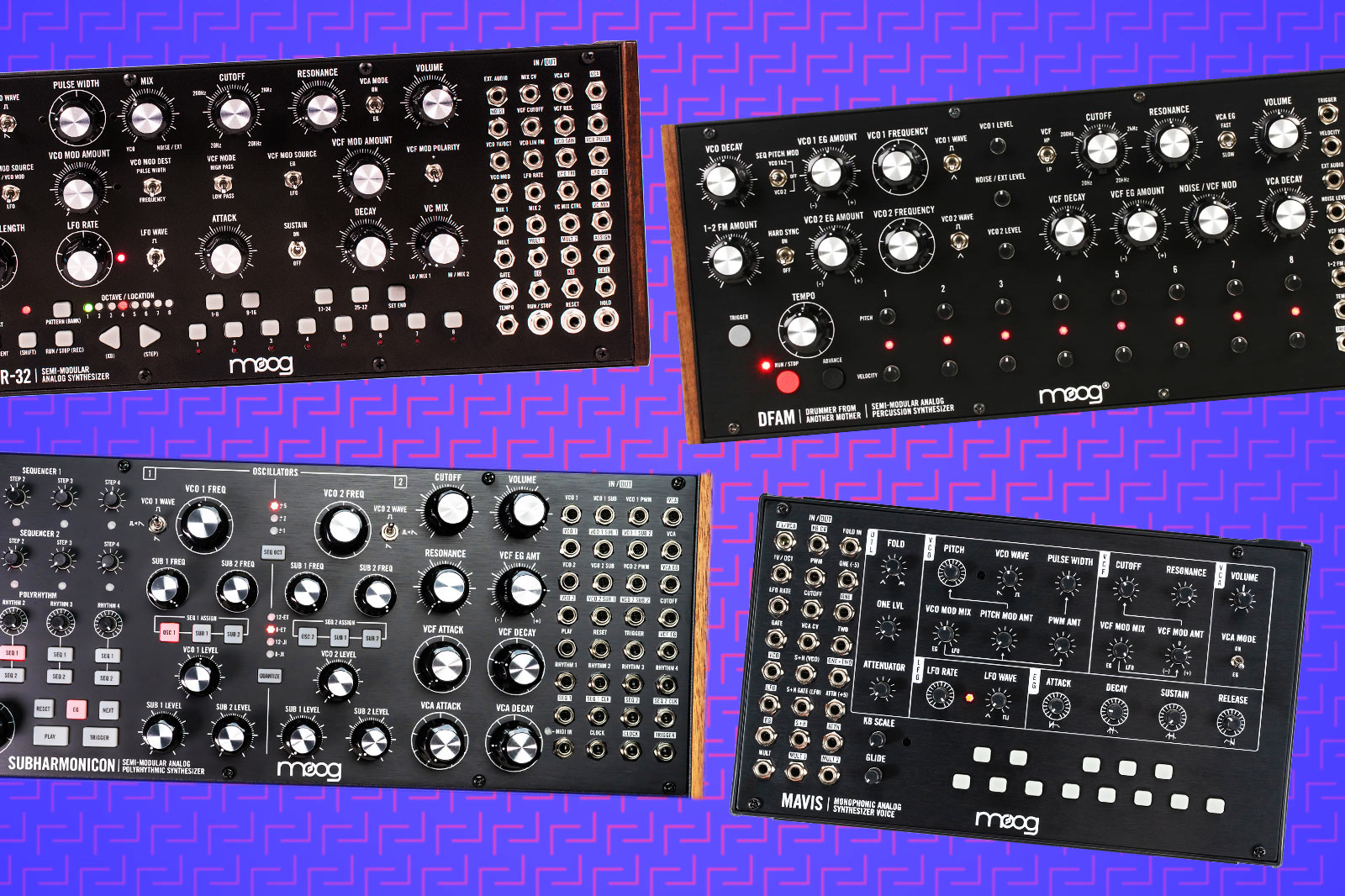 Which Moog Semi-Modular Synth is Right for Me?