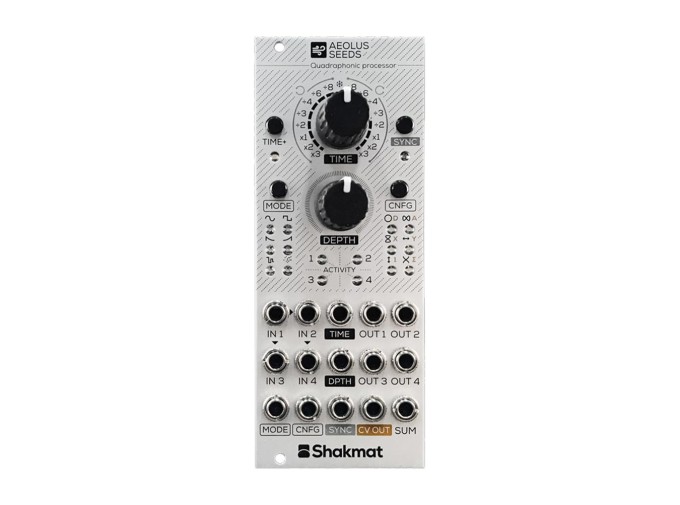 Aeolus Seeds is a quadraphonic spatializer with built-in modulation options, fantastic for panning signals in surround sound and vector synthesis. Connect up to four signals into the four inputs, which correspond to four VCAs. Due to normalization between the input channels, you can use a mono signal or a pair of stereo signals and bring them into the realm of quadraphonic spatialization.

The modulation of the panning features two controls: time and depth, both with CV control. Depth sets the amount of modulation from the modulators. Turning the time control to the right increases the speed clockwise while turning to the left increases counterclockwise. Six modulation modes are available: quadrature sine, square LFO, decay envelope, attack envelope, random, and granulizer with harsh or smooth grain envelopes. Sync this modulation to external sources, or let it run freely. Route the modulation CV output back out into any of the input sources with six possible modes. Two configuration modes set how the modulator moves between the speakers, quad, four independent speakers, or dual, two pairs of speakers. In quad mode, the movement is either circle, figure eight, or infinity symbol. In dual-mode, the modulation moves left/right, front/back, or diagonal.

Six additional utilitarian modes transform Aeolus Seeds into new configurations outside of traditional quadraphonic panning. Each of the four channels features a dedicated output, plus a sum output that adds a range of routing, mixing, and vector synthesis possibilities. Aeolus Seeds is an excellent solution for complex routing, mixing, and spatialization with built-in modulation for ultimate flexibility.