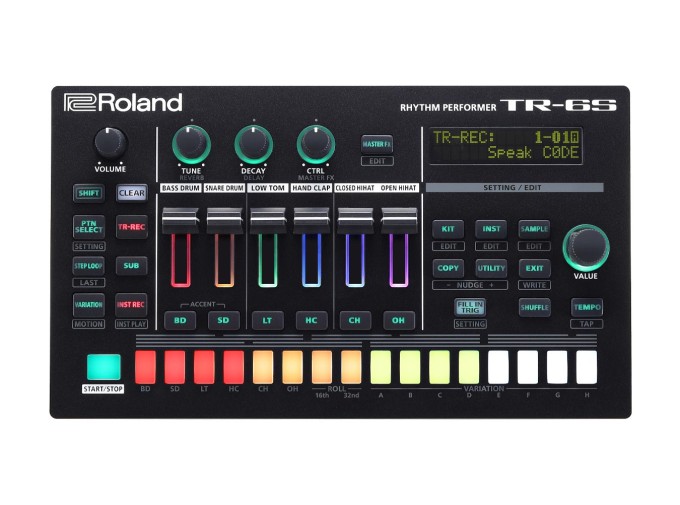 Roland’s back with a miniaturized version of its versatile flagship drum machine, the TR-6S. The 6S packs an impressive amount of functionality under it’s hood, retaining all the TR-sequencing, effects, and playability from its older sibling, the TR-8S. Much like the 8S, the TR-6S is filled all the classic drum sounds from Roland’s legacy library, including sounds from the 909, 808, 707, and 606, but not just samples, Roland has once again used their ACB technology to intelligently map out the circuits of these instruments and implement them in the 6S, so they’ll behave much the same way they did on their original devices! Mix and match with samples to create your own hybrid kits. Also included in the 6S architecture is a versatile FM synth, with over 66 tones to instantly generate grooves, baselines, or unique percussion.

The powerful effects section from the 8S makes a return with some of the highest quality effects ever seen in a groove box. Access to filters, compressors, reverbs, delays, and many many more tone shaping effects and dynamic performance utilities makes the 6S a powerful presence on stage. The TR-6S is also an amazing performance tool for any musician or producer with limited space, coming in at just under two pounds, and with a smaller footprint than a hardcover novel, the 6S was made for portability!