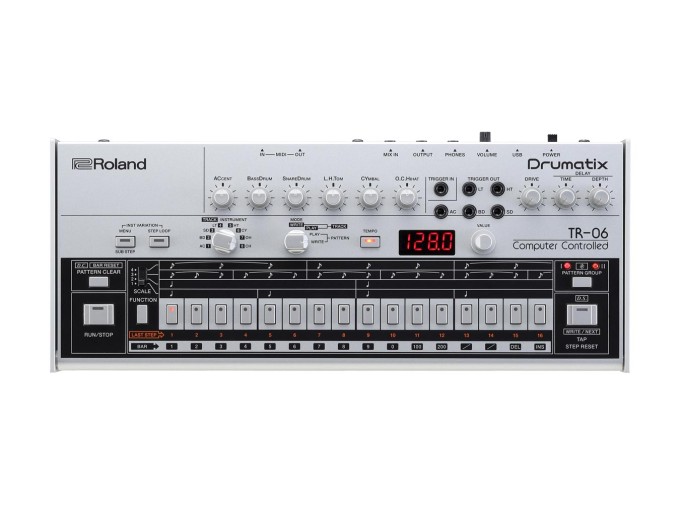 With eyes on the TR-606, Roland translates another legendary machine from their past to their Boutique lineup: the TR-06. Originally released in 1981 along side the TB-303, the TR-606 is a classic and beloved drum machine that has driven the rhythms of many popular tracks throughout the years, and even inspired artists to push genres such as Chicago Juke and Detroit Acid, among others. The original 606 was a pocketable powerhouse, and the TR-06 improves on virtually every aspect of that classic design.

Featuring eight drum sounds, and several not-so-secret variation sounds, the TR-06 sounds just like it’s forebear with punchy kicks, sizzling hats and cymbals, and the iconic cracking snare drum. Roland has once again used their patented Analog Circuit Behavior technology to dial in the tone and presence of this drum machine, and they’ve added a few bells and whistles for good measure in the form of an on board compressor, multi-delay effect, and a multi-distortion effect. Tape delays, reverbs, and flangers are all accessible through the delay engine, and the distortion offers saturators, bit crushers, and overdrive, enabling you to shape your sounds in near infinite ways. The original 606 had one of the most approachable sequencers ever implemented in a drum machine at the time of it’s release, the TR-06 retains that ease of use, and adds rich new features such as step probability, sub-steps for racheting, as well as fills, and intro loops. One of the most exciting additions to the TR-06 is the addition of five analog trigger outputs for syncing and playing your additional external gear, enabling your TR-06 to seamlessly integrate itself in your workflow.

Related ArticlesRoland Boutique TR-06 DrumatixBack Up to Their Old DrumatixBest Electronic Music Gear Under $500Grooveboxes, MIDI Controllers, and Synths for a BudgetBest Drum Machines of 2020Semi-Modular, DSP, Trackers, and More
Product Demo Videos
Baseck Plays: Roland TR-06 Drum Machine With Eurorack
​@baseck came to our studio to record some sounds with the new Roland TR-06. This is the newest Roland Boutique and it hast the looks and sounds of a vintage TR-606 drum machine. The TR-06 also has TR-808 and TR-909 sounds built in as well as multiple built in distortions and delays.

There are 5 trigger outputs on the TR-06, making it perfect for triggering eurorack modules or standalone drum synths with trigger inputs. You can also use it to advance a melodic sequencer and have all of your timing controlled by the TR-06. Also the TR-06 feels even more solid in your hands than a 606 which was made of plastic.
The Secret to Semi-Modular Setups with the Patch Pals
Patch Pals Jacob and Wes go over some different semi-modular setups and the concepts behind using different pieces of gear and even different formats in a "modular ecosystem."