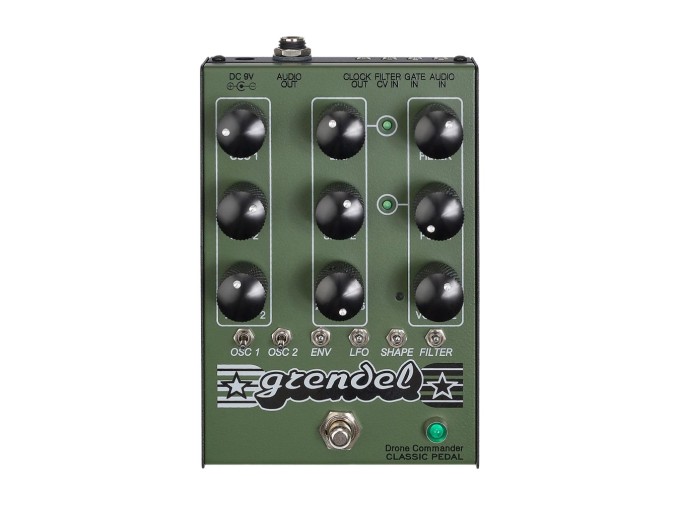 The Rare Waves Grendel Drone Commander Classic is a stompbox sized drone box, perfect for thick drones and textures. Comprised of two oscillators, a filter, and an LFO, the Drone Commander is a powerful device for constructing devastating walls of tone.

The two oscillators can be individually tuned and each have switches to select between square and triangle waveforms. A mix control sets the balance of which oscillator or blend of oscillators are available at the output. The LFO has adjustable waveform from short, clicky triggers to ramp waveforms. The shape switch inverts the LFO waveform from a rising to falling ramp as well as inverted trigger. The 2-4-8-16 knob sets the number of pulse modulations per LFO cycle. The pulse waveform is generated by a circuit called a phase locked loop, or PLL. It tracks the frequency of the LFO and multiplies the rate set by the 2-4-8-16 knob. It doesn't track pitch changes immediately, so it might take a second to catch up with the LFO, especially if it's at lower speeds. The PLL pulse signal is available on a 3.5mm output, labeled clock out, this is useful for syncing external gear.

The filter is directly modulated by the PLL waveform, set by the pulse knob. The shaped LFO can also modulate the filter, set by a switch. The filter has two frequency ranges, high and low. At lower knob settings of the low range, the filter will begin to self-oscillate. There is a filter CV input on the back of the unit that allows external signals to modulate the filter cutoff. This is summed with the internal LFO. The audio input jack allows external signals to be brought in and processed by the filter, overriding the two oscillators and mix control.

The stomp switch turns the output of the Drone Commander off and on. The envelope switch determines if the switch is fast or if there's an envelope applied which fades the sound in and out. The gate input triggers the same behavior, but the footswitch will override the gate input.

This iteration of the Grendel Drone Commander takes the architecture found on the original and improves upon the design. It adds a number of useful features that allow it to integrate with a larger setup, whether it be adding a layer of drones to accompany a performer or as a unique source of textures for a larger setup of modular gear.