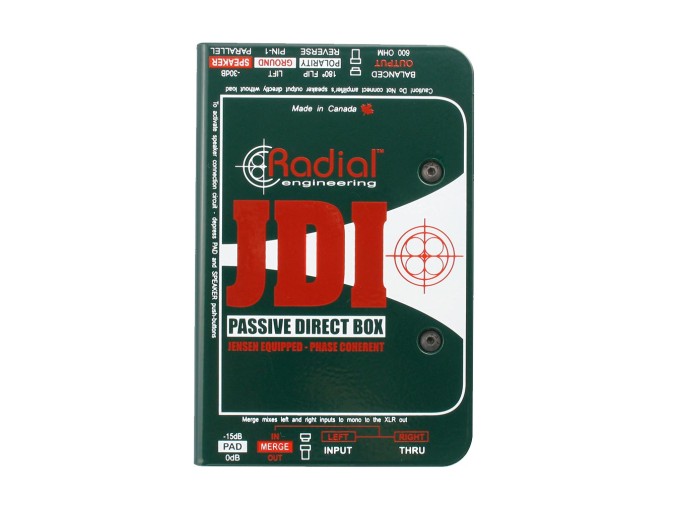 The Radial JDI MK4 Passive Direct Box is a high-quality passive direct box that has the advantage of providing complete isolation for reduced noise. The exceptionally low phase distortion, almost perfect linear response, and low harmonic distortion make the JDI direct box a superb choice for recording or live performance. The rugged construction allows it to be used in abusive environments without concern. The Radial JDI MK4 is ideal for acoustic guitars, bass, and keyboards.

Considered by many to be one of the finest passive-operation direct boxes available, this Radial DI is transformer isolated for optimum audio performance. 60-cycle ground loop elimination and adept handling of high-output, active instruments and keyboards make the Radial JDI discrete and versatile. Steel I-beam construction, baked enamel finish, and protected faceplate mean Radial JDI is built to survive.

The distinctive book-end design protects the switches against damage from abuse by providing a protective zone on both I/O panels. A baked enamel finish resists scratching while a no-slip rubberized pad on the bottom stops the JDI direct box from moving around and aids isolation. Inside, the Radial JDI features compound, welded I beam construction that protects the sensitive electronics from outside stress. The internal skeletal frame is locked together with 4 hex screws.

The input panel features a 1/4" instrument input and traditional thru-put. An innovative merge function allows the thru-put to be converted to a second input to allow stereo to mono summing. This is useful for interface with stereo sources such as keyboards or CD players in live shows where audio channels may be not always be plentiful. The Radial JDI also sports a -15dB pad to interface with higher output levels.

The output panel features a balanced 600-ohm XLR connector with pin-2 hot following the AES specification. A polarity reverse switch toggles pin-2 and pin-3 to allow the JDI direct bpx to interface with older non-AES equipment and for creative tinkering. The ground lift switch disconnects the XLR pin-1 ground from the Radial JDI for 100% input-to-output isolation. A second -30dB pad used in tandem with the -15dB input pad allows the JDI to be connected in parallel with a speaker. This, for instance, allows the engineer to tap the sound coming from a guitar amplifier speaker post-distortion thus adding another creative dimension. This unique function incorporates a speaker emulation filter circuit.

The JDI input features a high 10kOhm input impedance for minimal loading. This makes the Radial JDI ideal for interface with all instruments. The 600-ohm mic level output allows the JDI box to be used with typical snake systems that incorporate bridging transformers (splitters) without fear of overloading them.

As a passive device, the JDI direct box is particularly ideal for use with high output devices such as active or self-powered instruments such as acoustic guitars and basses with built-in battery-powered preamps, and AC-powered equipment such as drum machines, DJ mixers, and keyboards. These devices tend to overload most active direct boxes making them sound thin and edgy. The Radial JDI direct box is capable of exceptionally high signal handling without distortion.