Save Up to 40% for Independence Day! Use Code SUMMER10 for 10% Off Non-Sale Items. View Sale
CONTACT
Menu
Account 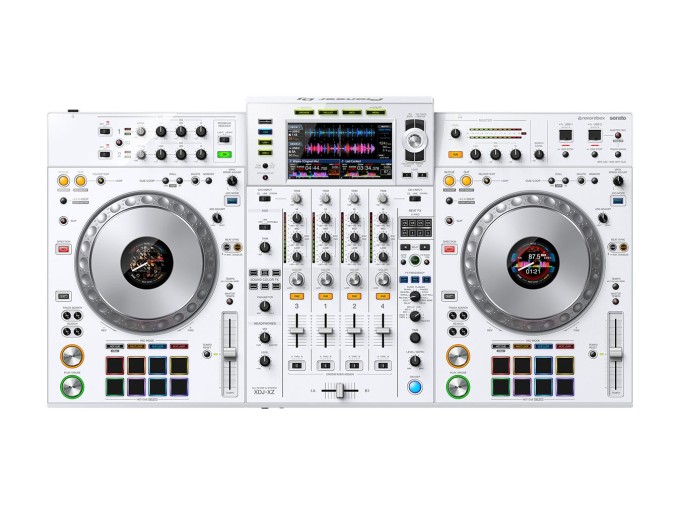 Coming in a fresh and limited-edition all-white coating, the XDJ-XZ-W is Pioneer's all-in-one four-channel DJ system for interfacing with any setup, be it standalone, with a laptop, or decked out with decks. It works seamlessly with both Rekordbox or Serato DJ Pro and helps bring out the most of either software. However, it can be used independently of a laptop. The center of the XDJ-XZ-W features a four channel mixer with two internal decks. You can connect external turntables, CDJs, laptops, or other devices to the XDJ-XZ-W easily through the extensive I/O on the back of the unit for access to the other two decks. The 7" LCD screen on the center of the XDJ-XZ-W provides clear indications of what is going on with your tracks. The mixer features three-band EQ with isolator or -26dB modes as well as combo low pass/high pass filter knob. The sound color FX includes filters, bit-crusher, noise, dub echo, and space which are post fader. The 14 beat FX have controls of effect time, tap tempo, Beat FX X pad, FX frequency, beat fractions, and depth. Each channel features eight-RGB pads. The pad modes include, hot cue, beat loop, slip loop, beat jump, keyboard, key shift, and two pad FX. The large CDJ-style jog wheels can be used in vinyl or seek modes and feature tension-adjust control to fine tune the response of the jog wheels. The screens on the center of the jog wheels display information including bpm, key, cue point, and time code. There are two USB A ports for drives or flash sticks which can be used to playback or record audio. Whether you're a DJ looking to upgrade to a more professional setup or a bar or club looking for a solid four-deck DJ-system, look no further.