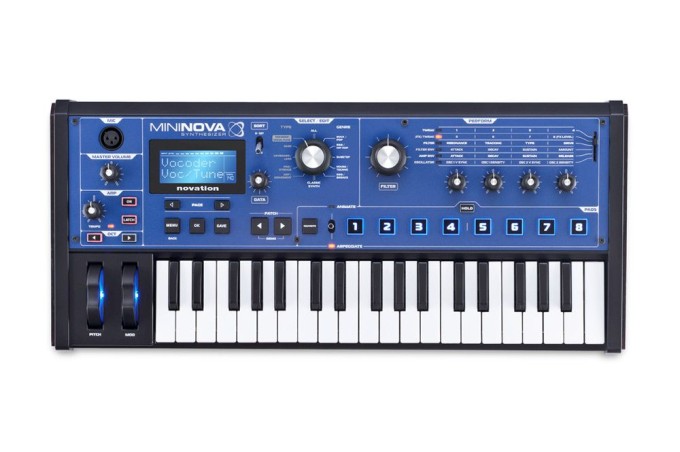 The Novation MiniNova is a compact 37-note synthesizer boasting the same engine as their UltraNova synthesizer. Any of the unit’s 256 sounds can be can be manipulated via its five knobs or eight animate buttons. Additionally, the MiniNova features 18 voices of polyphony, each accompanied by a total of five effects, including reverb, chorus, distortion, delay, compression, and EQ. The synthesizer also grants users access to classic vocoder effects and VocalTune.

The MiniNova features one of the most efficient sound engines ever included in a micro synth. Users can customize and store 128 individual sounds and search for patches using a variety of categories. If all that wasn't enough, the synthesizer features fourteen conventional waveforms, thirty-six wavetables, and twenty digital waveforms. There are also fourteen filter types, six envelope generators, twenty modulation slots that allow users the ability to link synth modules, and six LFOs.

If all this wasn’t enough, the MiniNova features a USB and MIDI I/O connectivity that allow it to be used in tandem with a computer, keyboard, or external sound module. It also comes bundles with Novation’s proprietary MiniNova Editor software, which affords visual control over its synth engine. When used in tandem with a DAW, the software functions as a plug-in and lets users conveniently edit their hardware patches.

Total of 66 Destinations including

Related ArticlesBest Synths for BeginnersHow to Choose Your First Synthesizer
Product Demo Videos
Novation // MiniNova synthesizer performance
Novation MiniNova has got a lot of features packed into a compact synth. This video shows Harry Coade putting it through its paces demonstrating the performance synth modes -- including Animate -- the realtime arpeggiator editor, the brand new VocalTune™ effect as well as the vocoder. He also shows MiniNova's range of sounds - from bass synth to vintage synth sounds -- you can select the type and genre you need quickly and easily.

MiniNova is a compact, super-cool performance synth with the same sound engine as its big brother: the UltraNova. It comes with 256 incredible onboard sounds which you can tweak with 5 knobs, or totally warp with 8 'animate' buttons. MiniNova also has an onboard VocalTune™ effect as well as a classic vocoder so you can recreate iconic vocal sounds from Hip Hop, Urban and electronic music.
Novation MiniNova Virtual Analog Keyboard Synthesizer Reviews
Register with :