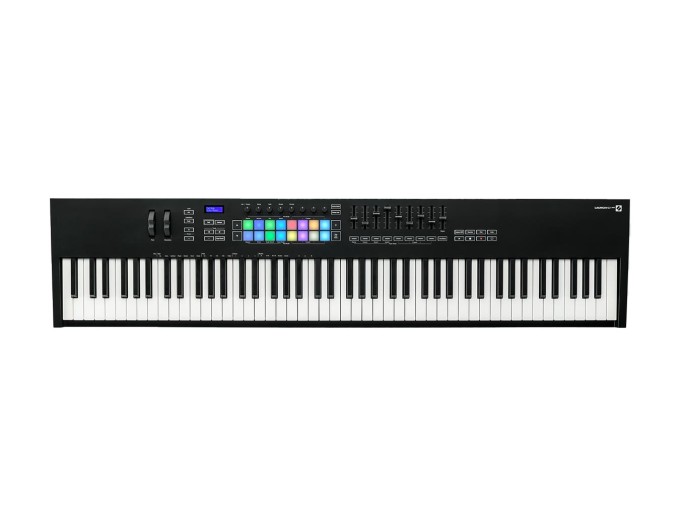 Add expression and feeling to your VSTs and arrangements with Novation's Launchkey 88, a piano-sized semi-weighted MIDI keyboard focused on making your productions come together and the flagship in teh Launchkey Series. Its 88-note keybed feels fantastic to play and has plenty of range to match any instrument, and it includes plenty of assignable hands-on controls for use with any instrument or plugin.

Alongside the pitch bend and mod wheel, you have access to nine faders and eight pots for controlling a number of device or DAW parameters thanks to the eight available modes per section—four of which are user-definable! Below the pots, the Launchkey 88 hosts 16 RGB backlit pads with yet another eight available modes to choose from for performing drums, chords, clip launching, or anything you can imagine with the custom section.

Further the capabilities of your instruments with the Launchkey 88's onboard arpeggiator, a flexible and feature-packed MIDI effect for creating everything from lush and intricate arpeggiation to even motivic passages. Define the arpeggiator's direction with up, down, random, and other styles, along with setting its rate, octave count, and even the rhythmic motion in which it plays back the note. Other properties like the gate length and swing are adjustable at a finer level, and unique to Novation's arpeggiator is the Mutation and Deviation controls, in which your arpeggiator will start to not only add chance and randomization, but morph your arpeggiation entirely. These special parameters go handily with the scale and chord functionalities, in which you can set the root note and scale you'd like all notes quantized to, as well as fixed and user definable chords to work around said scale.

The Launchkey series focuses not only on performability but also supreme integration with your DAW with both HUI and script controls for one-to-one matching in your DAW. The onboard transport control offers immediate interaction with playback, looping, and recording across your linear arranger section of your DAW, and the controls above include metronome activation, undo, quantize, and even Ableton's fantastic Capture MIDI function. With more settings to customize from the backlit screen and operational buttons, the Launckey88 is a composer's, producer's, and sound explorer's answer for a simple yet highly functional MIDI device for creating and arranging tracks.