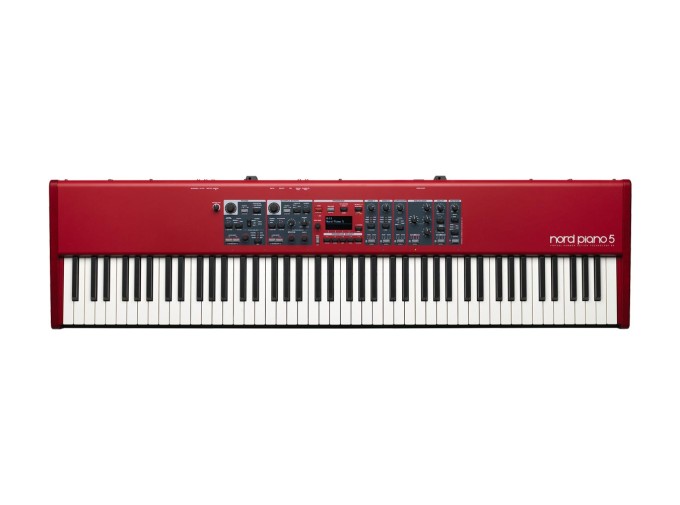 Handcrafted in Sweden, the Nord Piano 5 is the definitive digital piano for professional touring and studio musicians, improving upon its predecessor in almost every domain. Its signature red chassis houses a pair of powerful sound generators: the dynamic, highly naturalistic piano engine, and the all-new, deeply customizable sampling engine. Also new to the fifth generation, both of these engines each offer two independent layers, which can be split, superimposed, or even crossfaded between for maximum textural control.

Having such powerful sound generators alone isn't enough if the instrument doesn't feel expressive and natural to play, and with the Piano 5, Nord provides one of the most dynamic and responsive sets of keys with its stunning, weighted-action Triple Sensor Keybed. Every Piano 5 keybed that leaves the Nord factory is extensively calibrated to ensure the most natural response, and users can select between three different response curves to further customize the instrument to their playing style. The Piano 5 feels amazing to play, and it's also streamlined for live performance: setting a split or crossfade point for a layer is easily accessible from the panel controls, and users can seamlessly change between programs while playing, facilitating smooth sonic transitions mid-performance.

Nord's meticulous approach to the feel of the instrument is complemented by their attention to detail in the sound. Virtually every physical parameter of a piano is modeled in the Piano 5's piano engine—with their Virtual Hammer Action Technology and Advanced String Resonance, striking the keys at various dynamics yields vivid textural effects, deepening the connection between touch and sound that characterizes Nord's design philosophy. The included Nord Triple Pedal enables the optional Pedal Noise feature, which sonically simulates the physical motion of the dampers and hammers inside the piano when activated by the corresponding pedals.

The Piano 5's all-new sampling engine merits serious attention, too. This new module comes preloaded with a series of exclusive, high-quality samples from Mellotron and Chamberlin, as well as selections from ProjectSAM's Swing! and Symphobia libraries. With the Nord Sound Manager software, any of these samples can easily be replaced, while the Nord Sample Editor allows you to build custom sampler instruments from scratch. As with the piano engine, Nord offers some well-considered textural effects to enliven their sampling synth's sound. These include bright/dark tone color controls, Unison mode for ensemble effects, and Tru-Vibrato for applying naturalistic pitch variations to wind, string, and brass instruments.

Rounding out the Piano 5's impressive feature set is a series of studio-ready stereo effects, which can be applied to one or both layers in either of the Piano 5's two engines. These include delay, reverb, flanger, chorus, and a three-band EQ that lets you dial in the perfect sound for the studio or the gig.