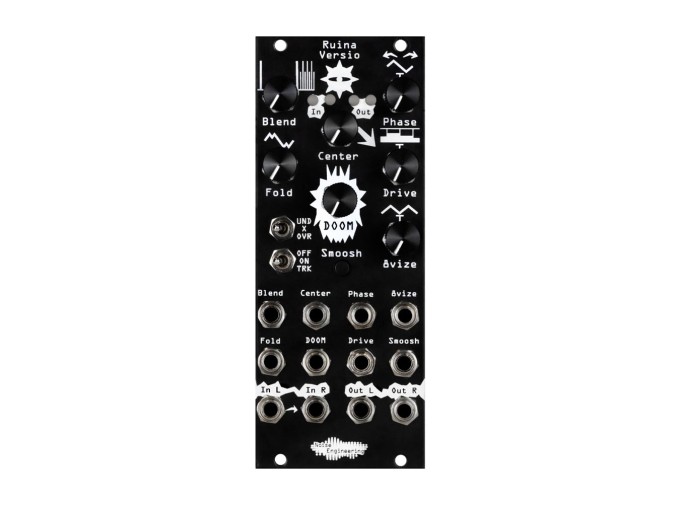 Filled to the brim with unapologetically digital character, Noise Engineering's latest Versio entry has arrived in the form of Ruina Versio, a totally in-your-face stereo distortion. This module draws from NE's extensive background in packing their modules with distorted, aggressive tendencies, incorporating elements from classics like the Basimilus Iteritas Alter and recent entries like Pura Ruina, while still managing to toss in some new ideas for sonic destruction.

Aside from one section with two parameters, each knob on the panel corresponds to a different part of Ruina Versio's destructive signal flow. The Fold knob engages Noise Engineering's iconic Infinifolder, the wave folding algorithm made famous by such heavy hitters as the BIA and Loquelic Iteritas, and is one of several ways the Ruina Versio adds harmonics to your signal. Center and Drive together make up the multiband saturator, inspired by the Seca Ruina module, determining the harmonic centerpoint of saturation and mix of low, low-mid, high-mid, and high bands respectively. 8vize performs full-wave rectification as heard on the Pura Ruina, flipping negative portions of the audio wave into the positive realm, with the resulting wave effectively doubled in frequency and pitch.

But Ruina Versio isn't just a greatest hits package of Noise Engineering distortions, as it has a few tricks it can offer on its own. The DOOM knob is a detuned sub-octave generator, adding low-end to any signal and decreasing pitch stability as the knob is turned up. At its highest settings, DOOM adds in buzzy overtones for harmonic interest in the high end. And if everything Ruina Versio has to offer you so far is still somehow not enough, engage Smoosh via the manual button or an external gate signal to add a whopping 128dB of gain at an instant. To shape your distortion even further, there's also an onboard notch filter, and three different signal flow configurations, rearranging the sections for other variations on its over-the-top character.

As with the other Versio modules, Ruina Versio is no one-trick-pony. Noise Engineering has made use of Electrosmith's Daisy DSP programming platform as the brains for the Versio series, allowing the user to easily swap between different firmwares as the needs of their system changes. Just connect the Daisy via USB and flash the module with Desmodus, Imitor, or any of the other firmwares to try out some new sounds on a whim. Truly designed for the connoisseur of distortion, embrace the aural punishment of Ruina Versio.

Related Articles62HP: Ultimate Guitar Effects ProcessorUsing a Modular Synthesizer for Guitar EffectsArtist Picks: Best Gear of 2021 - Part 1Best Synths, Effects, & Controllers with Andrew Huang, Benn Jordan, and MoreNoise Engineering's New Virt Iter Legio + Librae LegioIntroducing New Eurorack Module Platform
Product Demo Videos
Noise Engineering Ruina Versio Eurorack Distortion w/ The Patch Pals
Jacob and Wes got their hands on a new eurorack module from Noise Engineering which is a stereo distortion called the Ruina Versio. The Versio modules all use the same hardware but different faceplates and firmwares so you can easily plug your Versio in and change what kind of effect it is. We also used the Desmodus and Imitor Versio in this video for delay and reverb effects.
Best Gear of the Year : Artist Picks Part 1
62HP : Guitar Signal Processor, More POWERFUL Than a Pedalboard ?!
Join our Pal Jacob on an exploration of what a modular system can do when it's built with a guitarist in mind!
Noise Engineering Ruina Versio Stereo Distortion Reviews
Register with :