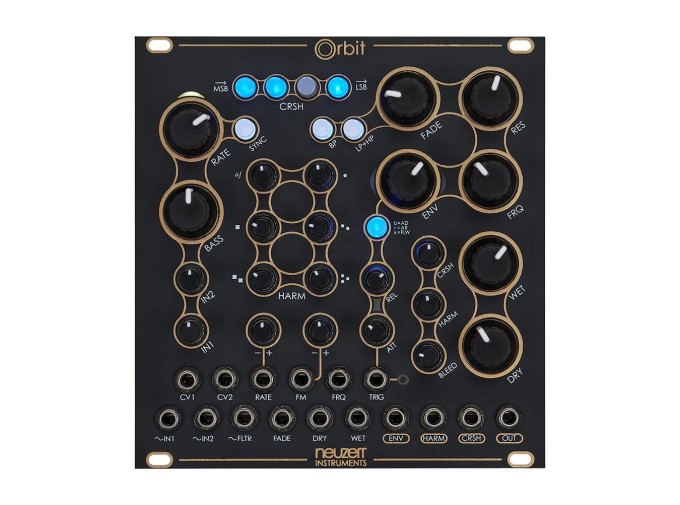 In their debut module, the Neuzeit Instruments Orbit is a compelling example of how smaller synthesis blocks can be combined together into a deep and rewarding instrument and processor with its own unique identity. Within Orbit you'll find bitcrushing, filtering and EQ, harmonically-related pitch-tracking oscillators, an envelope generator and LFO, mixing capabilities, and more—all useful elements in their own right. But the magic behind Orbit is how these sections all interact and relate with each other, resulting in complex sound design and processing capabilities without a ton of additional modules or patching.

There are two main sections in Orbit named CRSH and HARM, as well as the filter, dedicated low frequency EQ, and the envelope. External signals enter Orbit at the bottom left, offering two input VCAs with level and CV controls, as well as a third input which runs straight into the filter, skipping the other three sections entirely. The summed output of the two VCAs then runs through a bass boost/cut EQ, which passes onto the other processing sections, as well as being available via the BLEED level control in the mixer just before the filter. Thus, while there is a dedicated level control for the totally dry input signal at the output, BLEED is another way to dial in body and fundamental frequencies which may get lost in the midst of the other sections' processing.

If you have history with digital effects processing, you might have a good clue as to what the CRSH section does. As the name suggests, it's a bitcrusher, but with some interesting twists. The Rate control offers a full-range sweep of sample rate frequencies from 38 kHz down to 50 Hz, with an external CV input available for modulation. But engage the Sync button, and Orbit will analyze the frequency of incoming signals in real time, following changes in frequency and the Rate control now functioning as an offset control. CRSH also provides buttons for configuration of how bits are added back into the audio path, allowing for muting and inversion. These buttons normally correspond to bits one through four, but can control various combinations of up to eight bits via an alternative setting.

While CRSH introduces the power of Orbit's internal frequency tracking, it's the HARM section which really takes full advantage of this capability. It contains five square wave oscillators which can be individually blended in with the input—three of HARM's oscillators are fixed at an octave below, an octave above, and in unison with the analyzed fundamental frequency, whereas the other two may be freely tuned within 12 semitones above or below the fundamental and an octave above. Orbit's frequency analysis algorithm also takes dynamics of the input signal into account, and will follow amplitude changes of incoming signals.

BLEED, CRSH, and HARM are all summed together via a mixer with dedicated level controls before running into the analog filter. It's an OTA-based 12dB/Oct filter, and provides crossfaded low-pass and high-pass outputs, as well as an additional bandpass output. Of course, there's also resonance which can be pushed into self-oscillation and will track external 1V/Oct signals for accurate pitch sequencing. Orbit's internal envelope generator is internally connected to the filter's cutoff frequency, with bipolar control for affecting it in a positive or negative way. There's also an external output for the envelope, and with modes for attack-decay envelopes, cycling LFOs, and an internal envelope follower, it adds useful control utility to any modular system, as well as simply being patched back into one or more of Orbit's CV inputs.

For systems large and small, Orbit is a dense platform for adding sonic interest to any audio signal. While each of its components are readily available in individual modules, there's always something to be said for combining several features into a single package. And with its frequency tracking capabilities and interconnected routings, Neuzeit Instruments has clearly made a conscious effort to group these all together in such a way that facilitates clever usage. Orbit is a transformative sound platform with a great combination of twists on familiar concepts and its own unique ideas allowing for powerful signal shaping and generation in a performance-focused package.