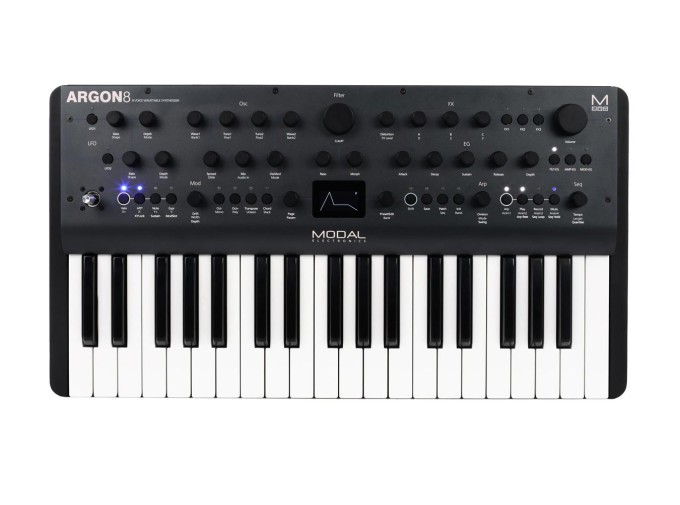 A two-pole morphing resonant filter with waveshaping distortion shapes and further morphs the wavetables for complex new sounds. It also features a full-fledged and powerful FX section with three stereo FX engines capable of flanging, phasing, chorusing, reverb, and delay. There are three envelope generators for amp, mod, and filters that can be independent or simultaneous and include a negative shaped version of the envelopes. Two powerful LFOs can be synced to the tempo or frequency divisions, and range in frequency from slow moving fluctuations well into the audio range. A four-axis joystick can be assigned to a slew of modulation destinations and can be locked if necessary. A Mod Matrix features eight assignable slots and four addition fixed routings. Eleven mod sources and fifty-two destinations provide for superior design of sound and playability.

The Argon8 includes an arpeggiator with 32 steps with rests and up to 2048 steps before repeating. It also features a real time sequencer with up to 512 steps with quantization and four animations that can be recorded and edited for sequenced modulation. LFOs, effects, and sequencer can be clocked internally or externally via sync in/out on 3.5mm jack. It features MIDI in and out, as well as USB MIDI. Expression, sustain pedal, and external audio inputs are also available. Outputs can be mono or stereo, and of course, the Argon8 also features a headphone jack.

As of the release of Argon8 firmware V2.0, the Argon8 hosts a number of new features—including EG curve shape control, polyphonic step sequencing, chord inversion, and even MPE support. That's right, you can now control your Argon8 via the MPE controller of your choice!

Argon8's wavetables are were carefully sculpted to provide access to a wide variety of sounds from classic analog-style techniques to esoteric, algorithmically-generated, glitchy sounds. With four oscillators per voice, extensive wave shaping and audio modulation options, a morphing resonant filter, and three stereo effect engines, Argon8 will do everything from smooth, slippery bass lines to crackling atmospheric textures.

All this combined with an eight-slot modulation matrix, velocity and aftertouch-capable keybed, and 512-note sequencer makes the Argon8 an uncommonly flexible tool for exploring the timbral universe of wavetable synthesis.
Modal Electronics Argon8 Wavetable Keyboard Synthesizer Reviews
Register with :