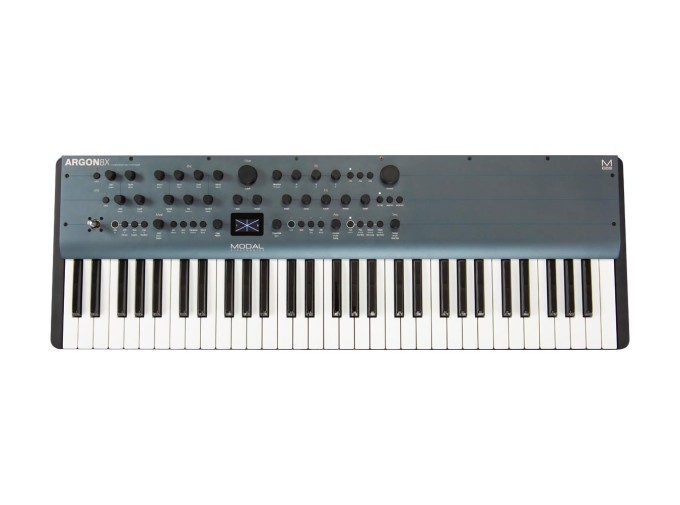 The Modal Electronics Argon8x is a 61-key version of the Argon8 eight-voice wavetable synthesizer, adding a larger keybed while retaining the same powerful sound engine. This polyphonic, monotimbral digital synthesizer features eight voices, each with four wavetable oscillators. The four wavetable oscillators are grouped into pairs and features 120 waveshapes, split into 24 banks of five morphable waveform sets. These include the waveforms found on classic analog synthesizers, a selection of modern, EDM-style waveforms, and many from the Modal 002. The two groups of waveforms can be spread apart and mixed to create complex combinations of waveforms.

These waveforms can be further altered using 32 static wavetable processors and eight flavors of wavetable modifiers. Processors include de-rez, wavefolders, phase shapers, and rectifiers. The modifiers include different kinds of ring mods, FM, and sync modes. The filter is a two-pole multi-mode filter with selectable filter algorithms. The filter types can be morphed, smoothly transitioning from a lowpass to highpass, with either notch or bandpass in the middle. There are four FX available, a static distortion, and three assignable FX. These include reverb, delay, flanger, chorus, and more. Voice drift introduces subtle shifting of pitch, giving an almost analog feel to the oscillators.

The 61-key FATAR TP/9S keyboard features velocity-sensitive keys with aftertouch. There are seven keyboard modes: poly, mono, unison two, unison four, unison eight, stack 2, and stack 4. Almost every parameter is accessible using the encoders, without needing to dive into the menu system. When you move an encoder, the OLED updates, showing the parameter changes. This includes waveforms, modulation destinations, filter slopes, and sequencer functions. Secondary and tertiary functions can be accessed using the shift modes. Deeper functions can be accessed using the menus.

The modulation matrix allows for routing of 11 mod sources to 52 destinations in eight assignable modulation slots. Each voice has three envelopes, amp, filter, and an assignable envelope that can be freely assigned. There are two LFOs, one global and one poly, which can be tempo synced and run into audio rate. The poly LFO can be synchronized to MIDI clock divisions. The joystick can be freely assigned and allows for four axes of modulation. While it has spring return, the position of the joystick can be locked using the X/Y lock buttons. The programmable 32-step arpeggiator features 31 direction modes and 16 divisions including triplets. The polyphonic sequencer can feature up to 512 notes and four lanes of parameter automation. The sequencer can run at the same time as the arpeggiator, and you can play the keys over it—making for a highly animated playing experience.

For players who initially wished the Argon8 had a wider range of keys, the Argon8x should come as a pleasant surprise.

As of the release of Argon8 firmware V2.0, the Argon8 offers tons of new features—from EG curve shape control, polyphonic step sequencing, and even MPE support. Yes, you read that right—you can now control your Argon8 via the MPE controller of your choice!