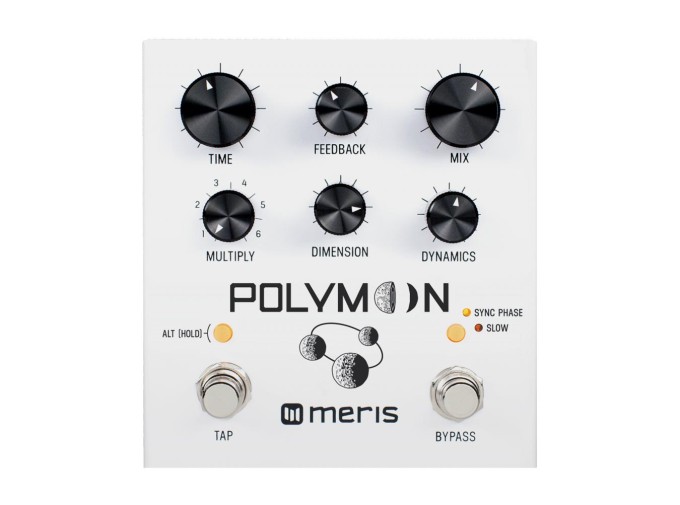 Polymoon from Meris is a stereo, multi-tap delay pedal with incredible modulation potential built-in, altering your perception of what a delay pedal can do. Inspired by the idea of chaining multiple delay processors together, Polymoon will warp time in ways most single delay pedals are unable to. The standard parameters of delay effects are present here, with control over time, feedback, and dry/wet mix, but Polymoon breaks from the norm by adding several additional parameters. The Multiply knob adds up to six delay taps, and combining this with the Dimension control will smear repeats into pseudo-reverb territory. Dynamics controls the internal flanger, perfect for wobbling, lofi delays and sustained, chorused feedback drones.

Like other Meris pedals, Polymoon features a second Alt layer, where each knob controls an additional parameter for sculpting modulation and creating truly wild delay sounds. The feedback path may be shaped by a single knob Tilt EQ control, altering the regeneration of low and high frequencies. Adjusting the Time and Multiply knobs while holding Alt introduces a variety of modulations to the early and late repeats, respectively, adding everything from subtle chorusing to pitch shifting and FM. Alt will even affect the Tap Tempo switch, providing an easy way to switch from quarter note to dotted eighth subdivisions in relation to the tapped tempo. Best of all, each and every parameter on the primary and Alt layers can be controlled by expression pedal or MIDI, meaning that Polymoon excels at morphing between states and completely changing its character at the turn of a heel.

Lose yourself in a sonic voyage with Polymoon, and allow it to enhance and alter your perception of time.