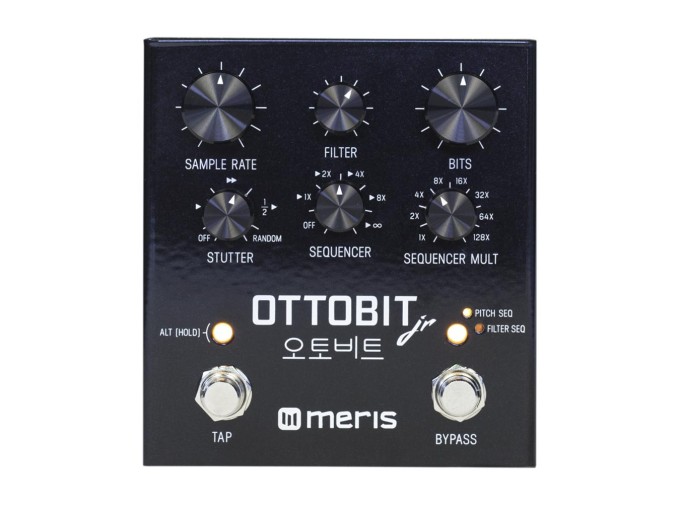 Providing a different kind of vintage flavor than most pedals, the Ottobit Jr. from Meris is a stereo bitcrusher and filter that takes inspiration from retro video games and busts into a whole new dimension, thanks to its built in sequencer. On the surface, each knob controls the labeled parameter. Sample rate allows for reduction from 48kHz all the way down to 48Hz, which when combined with bit reduction gives any guitar, bass, or other instrument a gritty, 80s arcade quality to the sound. For taming the harsh upper harmonics that may be introduced, the Ottobit Jr. features an excellent ladder-style lowpass filter, but additionally sounds great on its own with any source input. Ottobit Jr. also contains a musically tuned stutter engine, responding to pick attack and transients to glitch and repeat notes in relation to the internal tempo, which may be set with taps or external clock.

The above would be a compelling pedal in itself, but Meris did not stop there, and added a six step sequencer capable of controlling pitch, filter, or sample rate. Holding the Alt switch configures each knob to represent a step in the sequencer, providing precision control over dialing in arpeggios, sample-and-hold-like filter sequences, or automated sample rate reduction. Like the stutter engine, the sequencer is tied to the internal tempo, with a multiplication knob allowing one to run sequences up to 128 times the base tempo.

Ottobit Jr. isn't your typical bitcrusher pedal, rather a companion for otherworldly explorations of pitch and timbre.

Before we shipped it off to her though, we had to give it a rip with the UDO Super 6 !
Nick Reinhart : Giving Effect Pedals Some Context : Boss SL-2 Slicer
Our Pal Nick Reinhart returns! He's back with a brand new bag of tricks and tons of fun to share.
This time he'll be taking a look at the Boss SL-2 Slicer, and how he puts effects pedals that do whacky things into the context of a song or jam.