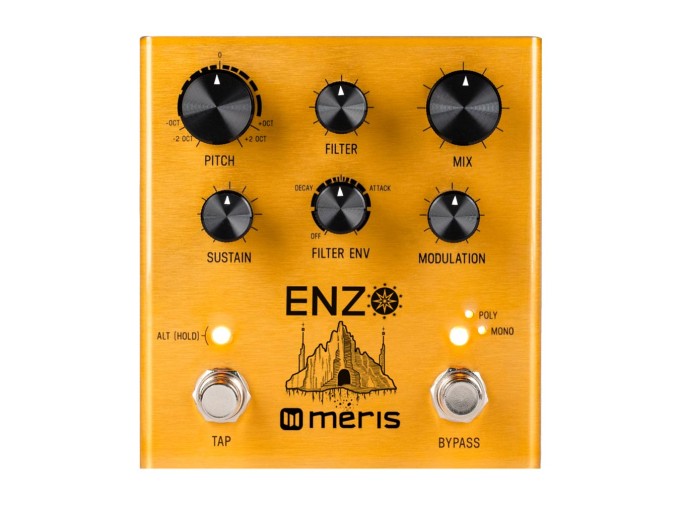 Enzo from Meris goes beyond a simple guitar effect and becomes an instrument in its own right, providing classic and rich synthesizer sounds with deep sound sculpting capabilities. Enzo operates in four modes; Mono, a dual oscillator single voice synthesizer, Poly, a multi-voice polyphonic synthesizer that can track chords; Arp, an arpeggiated synthesizer linked to the tap tempo, and Dry, which disables the synthesizer portion and applies a pitch shifting effect with filtering, ring modulation, and delay. The pitch of the oscillators ranges over four octaves with two octaves up and down from the base pitch available. Oscillators can be detuned from each other using the modulation control, leading to thick tones.

It wouldn't be a classic synthesizer without a great sounding filter, which in this case is a multi-mode filter with six different modes. These include both ladder and state variable style filters, each with low pass, band pass, and high pass filters. The filter envelope can be used to open up the filter with the dynamics of your playing, making expressive filter sweeps easily accessible. Extend the length of the envelope with the sustain control, and the envelope can behave as a triggered envelope or as an envelope follower, reacting differently to your playing style. The internal delay is a two-tap tap tempo delay with control for time, feedback, and level. A tunable portamento smoothly glides between notes as you play. In addition, the ring modulator features adjustable rate as well as internal modulation from the envelope over rate. Control all parameters with the expression pedal input as well as the MIDI input/output found on many of Meris' pedals. Enzo not only works great on guitars, but makes vivid synth tones out of anything you throw at it, drums, vocals, or even other synthesizers.

Join us for a walkthrough of some routing, unique signal manipulation, as well as weird and whacky tones!
Meris Enzo Stereo Guitar Synthesizer Pedal Reviews
Register with :