Item#
N13-04567
$5,999.00
Add to Wishlist
Special order delivery times vary. Note that special orders may not be returned or cancelled. Feel free to reach out for more info!
Skip to the end of the images gallery 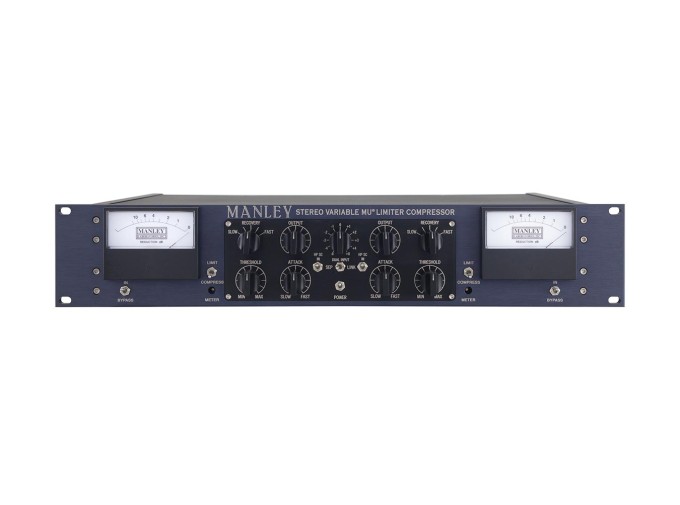 Combining their two fantastic modifications into one unit, the Variable Mu MS mod & T-Bar mod from Manley is a stereo limiter and compressor that offers tons of functionality, unbelievable dynamic control, and a huge sound. Known as "The Works", this edition of the Variable Mu ties together the fantastic mid/side encoding and decoding alongside the tube replacements that lean more towards the original tubes from yester-years' Variable Mu. However, the glimmer and glam are not just fancy bells and whistles, but useful tools to add depth and control over the fantastic dynamic processing the Variable Mu is known for on mixes, two-tracks, and masters.

Each step of the way, the Variable Mu takes tube gain staging (hence the Mu), amplification, and leveling with maximum high-voltage headroom for a clean and powerful signal. The input gain is ganged for both channels, but this should be seen more as a pro than a con considering it's general use for stereo mixes and two-tracks. Each channel can be set to a gentle compressor with a 1.5:1 ratio, or be pushed into maximum drive with a limiter that starts off at a 4:1 ratio but pushes up to 20:1 once the gain reduction surpasses 12dB.

Dynamic control is implemented with a continuous threshold control for fine-tuning gain reduction, while the time shaping tools feature a relatively smooth attack time of 25ms to 70ms and a quite slow release with times of 200ms all the way to 8 seconds. All three of the controls can be set individually or in a stereo link for one set of controls affecting both channels, and all compression and limiting can be easily viewed via the backlit gain reduction VU meters. The final output controls are unique for each channel making it very easy to dial in the perfect amount of leveling per channel.

Looking specifically at the modifications, the MS mod provides selectable input and output mid/side encoding and decoding, offering a large assortment of stereo options such as squashing the mids while keeping the sides lively or even utilizing in a broadcast scenario where heavy usage of mixing mid/side is important. The T-Bar mod on the other hand is more of a flavor change back to the stylings of the less obtainable 6386 tubes by putting in a pair of 6AB6 pentodes that are rewired as single triodes. This change not only replicates the reduction and limiting curves found in the 6386 tubes, but also takes out the poor quality found in current ones that push noise and microphonics.

The Variable Mu "The Works" edition from Manley is the end-all-be-all for those looking for maximizing their usage and versatility out of a classic bus compressor/limiter—that still persists to this day for its epic sound.