Item#
N13-04571
$7,199.00
Add to Wishlist
Special order delivery times vary. Note that special orders may not be returned or cancelled. Feel free to reach out for more info!
Skip to the end of the images gallery 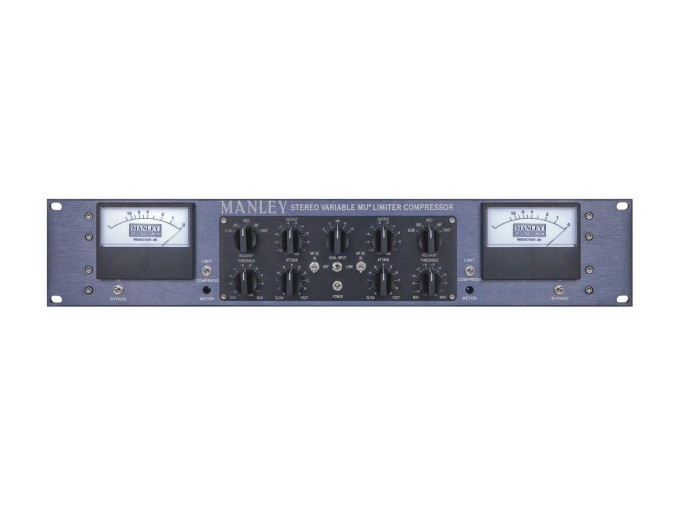 Providing two solid mods that extend and enhance how the Variable Mu works, Manley's Variable Mu Mastering Version MS mod & T-Bar mod is a stereo limiter and compressor for mastering engineers that want the most out of their setup. The control of the unit has been contained to a set amount of possibilities via detented knobs, meant specifically for easy and reliable recalls on mastering sessions. Before diving too deep on what makes this unit so special in the Variable Mu lineup, the core of which this modified mastering edition must be touched upon.

Each step of the way, the Variable Mu takes tube gain staging (hence the Mu), amplification, and leveling with maximum high-voltage headroom for a clean and powerful signal. The input gain is ganged for both channels, but this should be seen more as a pro than a con considering it's general use for mastering. Each channel can be set to a gentle compressor with a 1.5:1 ratio, or be pushed into maximum drive with a limiter that starts off at a 4:1 ratio but pushes up to 20:1 once the gain reduction surpasses 12dB.

Dynamic control is implemented with a stepped threshold control for simple and recallable gain reduction, and depending on the mode determines whether each increment is a half or quarter decibel. Controlling when compression or limiting kicks in and how long it lasts, the attack portion has been enhanced with a wider range of selectable speeds while the quite slow release retains its original timing choices. All three of the controls can be set individually or in a stereo link for one set of controls affecting both channels, and all compression and limiting can be easily viewed via the backlit gain reduction VU meters. The final output controls are unique for each channel making it very easy to dial in the perfect amount of leveling per channel.

Known as "The Works", the MS and T-Bar mod offer both mid/side encoding and decoding as well as a newer set of tubes to replicate the reduction of the original units' tubes. Able to apply mid/side processing to the input, output, or both, the MS mod offers great extension into stereo processing by offering an easy way to smash the mids while leaving the sides untouched, vice-versa, and everything in between. The T-Bar mod replicates the sound of the rare and original 6386 tubes by wiring up paired 6BA6 pentodes as single triodes, almost identically matching the gain reduction and limiting curves while taking out the known issues of rarity, noise, and microphonics.

These two modifications plus a fantastic way to recall your limiting and compression settings make the compelling and dynamic Manley sound of the Variable Mu a must-have for any mastering engineer's suite.