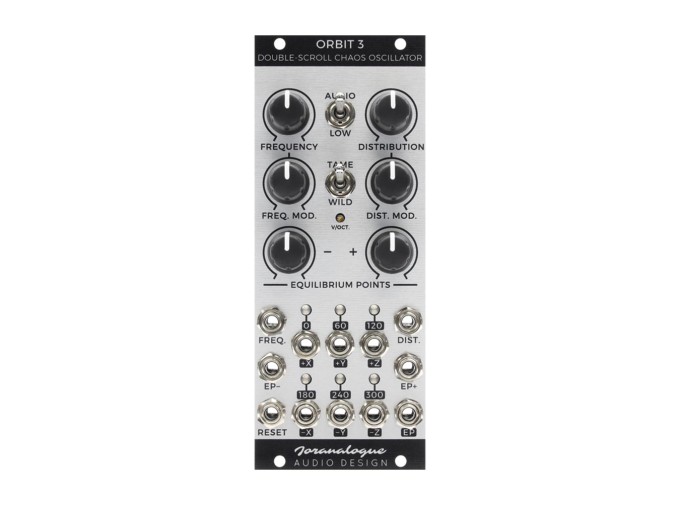 Orbit 3 is Jornalogue's modular ode to chaos, in the true mathematical sense of the word, being a voltage-controlled oscillator and LFO presenting irregular yet periodic movement. Not just producing total randomness, chaos theory is deterministic and yields recognizable patterns, which has strong performative implications in the world of Eurorack synthesizers.

Specifically, Orbit 3's analog design is based upon the concept of a double-scroll attractor, itself a type of strange attractor, with its six main outputs representing the movement of a particle in three-dimensional space around two points of orbit. As for what this really means, certain parameter settings will result in near white noise, while others stabilize into more coherent timbres and waveforms.

Functioning at both audio and modulation rates, Orbit 3's Range switch allows it to cover a total range of seven-minute cycles all the way up through the range of human hearing to 22kHz. With zero volts considered as the origin, separate points of Equilibrium can be specified in the positive and negative domains, defining output amplitude, waveform symmetry, and traits of the chaos circuit. Distribution affects the tendency of the oscillations to orbit around one equilibrium point before switching to the other, and a switch for Tame and Wild modes shifts Orbit 3 to settle into more stable or irregular orbits respectively.

Every variable parameter on Orbit 3 has a corresponding control voltage input, with a level control available for Frequency and Distribution modulations. For further intermingling with the rest of your modules, Orbit 3's Reset input functions similarly to a traditional Sync input, but with the additional layers of chaos, this can produce a number of different audible results. Likewise, the EP output generates a gate signal depending on which equilibrium point is currently being orbited. The six outputs correspond to X, Y, and Z directional movement, while also sharing a successive 60 degree difference in phase.

If true randomness isn't cutting it for you anymore, blast off with Orbit 3 and journey into a duality of regularity and unpredictability.