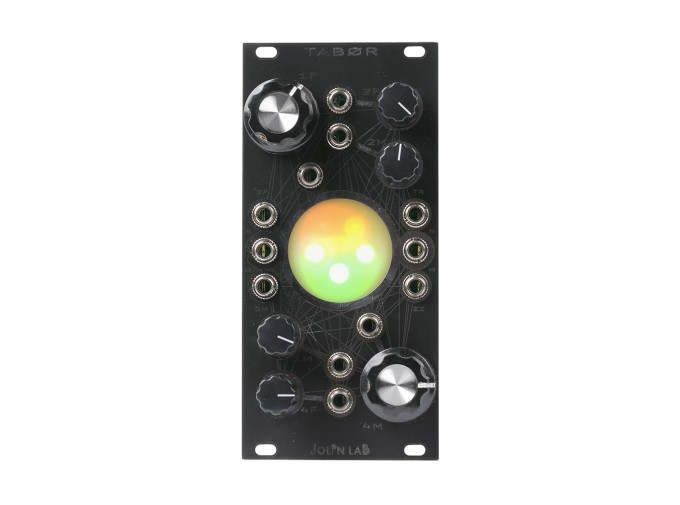 TABØR from Jolin Labs is a fascinating sound source and modulation module designed around four avalanche transistor oscillators, which constantly interact with each other causing a variety of sonic, and control voltage havoc. Specifically, the network of oscillators admits to the following structure: OSC1 inflects the rhythmic fluctuations of OSC2, OSC2 then affects the behavior of the OSC3, which in turn can be set to modulate the waverings of OSC1, and OSC4 hijacks the whole system with sporadic interruptions. In practice, this results in morphing, and evolving rhythmic textures, noise bursts, squeals, and other kinds of luscious abstract electronic tones. This complex behavior of four intertwined avalanche oscillators is also expressed visually through a stunning color-coded LED light show at the center of the module, which not only looks great but also provides a clear reference for each oscillator's state at any given moment. Moreover, each oscillator is outfitted with two control inputs: F defining its pulse frequency, and M for the amount of cross-modulation between that oscillator, and the others.

As far as the outputs go, TABØR has three. TR output is sending out triggers and positive control voltage signals. NM carries the main audio signal of all oscillators mixed. Finally, ZZ is an auxiliary output bearing a fuzzed envelope signal. This combination of signals paired with chaotic behavior renders TABØR as an extraordinary sound source, complex modulator, and a chaotic trigger generator.

If you are looking for a unique addition for your Eurorack modular synthesizer that could both bring its tonal spectrum to the new horizons, as well as enrich your setup with novel CV signals—look no further, TABØR is exactly it, and so much more.