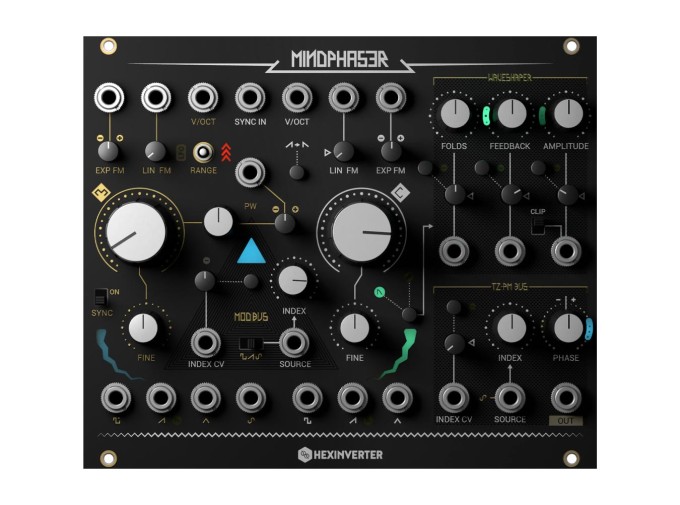 Mindphaser from Hexinverter Electronics builds on the legacy set forth by the Buchla 259 Complex Wave Generator, but is a far cry from a clone. It gets its name from the thru-zero phase modulation circuit, a feature not always seen on a complex oscillator. Mindphaser starts with a pair of sawtooth-core oscillators: the carrier and modulator, and both range in frequency from sub-audio to supersonic. The modulator oscillator has an octave/range switch to select between frequency ranges and puts the oscillator into the sub-audio spectrum. Both oscillators feature linear, exponential, 1V/oct CV inputs and individual waveform outputs.

The waveshaping and phase modulation sections are where things get really interesting. The sine wave from the carrier oscillator passes into the waveshaping section to add harmonics and sonic interest. As for the wave folder, it's an analog triangular or rampoid folding circuit with a five-octave range that begins to clip the waveform at high settings. Additionally feed the folded waveform back onto itself using the feedback control. With no wave folding, the feedback will morph the sine wave into a triangle or sawtooth waveform, depending on if the folder is in the triangular or rampoid mode. Control the amplitude of the waveform or add additional ring mod harmonics with the thru-zero amplitude control. A soft clipping switch adds a bit more character to the folded waveform.

Mindphaser excels as a source of complex tones and timbres. It combines stable and wide-ranging oscillators with an extensive sonic shaping with a plethora of frequency, waveshape, and phase modulation possibilities.