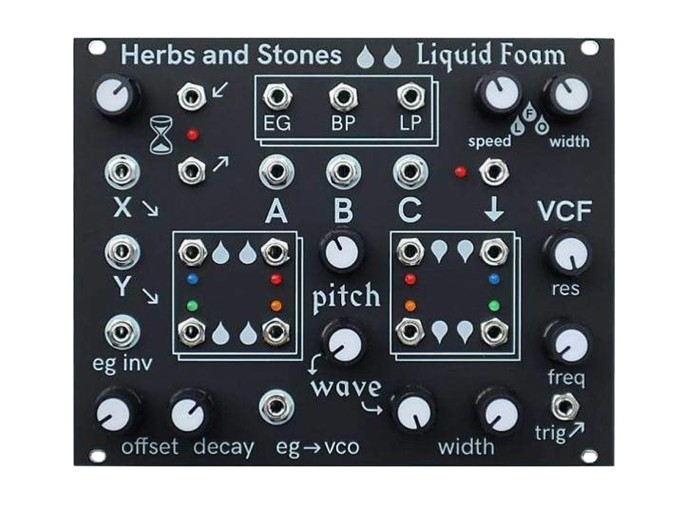 Bringing their one-of-a-kind analog groovebox to a wider audience, the Eurorack version of Liquid Foam by Herbs and Stones swaps bananas for 3.5mm jacks, delivering instant integration with the most popular modular synthesis format. But this potassium-free edition of Liquid Foam isn't merely a format exchange—the circuitry has been refined to more easily hang with the wide variety of signals found within a typical Eurorack setup, and the filter and wave mixer sections have been tweaked for enhanced sound quality and performance.

At the center of Liquid Foam are two, four-stage sequencers, and rather than behaving like a typical step sequencer, each will generate gates based upon specific external factors. At the left, Sequencer A defaults to simply rotating a single gate between its four outputs on every clock pulse, but patching other signals to the X and Y inputs will redirect the rotating gate, allowing for more complex patterns to emerge. Contrasting with this, Sequencer B on the right will generate any combination of four gates at once, depending on the relationship between the clock rate and LFO speed and pulse width.

Despite only offering gates at its sequencer outputs, Herbs and Stones devised a clever way to handle melodic pitch sequencing through the use of three weighted inputs. Sending triggers into any combination of the A, B, and C jacks will generate different pitches, depending on which inputs are activated. In terms of sound palette, the VCO provides a dual-stage wave mixer, first blending between triangle and sawtooth waveforms, and then adding in a square wave with variable pulse-width. From there, the vaguely 303-reminiscent resonant filter—now with a new bandpass output alongside the original lowpass—delivers punch and warmth.

The onboard envelope is a decay-only contour generator that gets triggered every time a gate is sent into the ABC jacks, but both trigger and EG outputs have been added to make the Liquid Foam a collaborative member of any Eurorack system. By default, the EG will only affect the filter cutoff, but can be momentarily applied to the oscillator via the EG-VCO input, or inverted via the EG INV input.

In this new version of their beloved groovebox, Liquid Foam continues to encourage adventurous patching with palatable sound, expertly balancing the approachable and the avant-garde.

Related ArticlesTrailblazing with Herbs & Stones PathwaysA Matrix Mixer as a Path to Self-DiscoveryStaff Picks: Best Synths + Modular GearOur Favorite New Gear in 2021
Product Demo Videos
Best Gear of the Year : Part One : Staff Picks
It's been a massive year for hardware instruments, modular synthesizers and as we approach the end of this year we've decided to take a look back at some of our favorite new synths, modules, and more!

In part one of this series we asked the crew in the office what they were most excited to see arrive in 2021 in the category of synthesizers and modules!
Herbs and Stones Liquid Foam Analog Groovebox (Eurorack) Reviews
Register with :