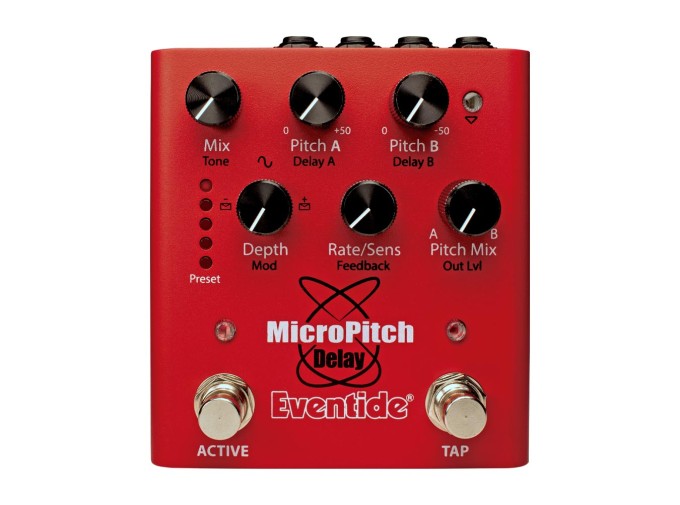 Inspired by decades of using Eventide processors to add lush, stereo width and special effects to all kinds of records, MicroPitch, part of the Dot9 series, is the perfect pedal to keep around for adding that magic polish to any instrument on stage or in the studio. With ancestry that traces back to the first-ever digital effects processor in the H910 to the legendary H3000, MicroPitch is a mature take on Eventide's refined formula of subtle pitch shifting with delay, and incorporates a host of new features as well. Although the pedal itself has six knobs, a generous 12 parameters are available through primary and secondary layers, accessible by the button at the top right. Add in stereo I/O, MIDI, and expression/CV control and MicroPitch makes its position as an effects powerhouse well known to anyone that uses it.

Should you be curious to uncover the secrets behind MicroPitch, look no further than the name. The effect makes use of parallel pitch shifters, with a maximum range of 50 cents (or one equal tempered quarter-tone) above and below the input signal's pitch. Of course, at extreme settings this might be a bit disorienting, but dialing the knobs to more tasteful positions unlocks the thick, pseudo-multi tracked sound that provides guitars, synths, or any instrument with a commanding presence. Pair the pitch shifting with the delays found on the second layer, and the MicroPitch moves into the territory of vibrant, modulated delay with heavy chorusing that pairs well with dreamy pads and airy vocals.

To make its dedicated pedal form a unique journey for those who might have experienced MicroPitch in some of its other forms, Eventide was sure to add in a few handy features for this iteration. Most forms of the MicroPitch have offered LFO modulation of the pitch shifting, but now there's also an internal envelope follower that follows the dynamics of the incoming audio signal for responsive modulations. Positive and negative variations on the envelope follower are present, offering increased or decreased pitch modulations with higher input signal volumes. Pair this with drums or anything with prominent transients for some wild effects. Speaking of special effects, dialing in high Feedback settings on the second layer with shorter delay times and prominent pitch shifting will result in continuously ascending or descending pitches. Layer this in with both the Dry/Wet Mix and Pitch Mix controls to get your desired texture for complex sound design.

As with all Eventide pedals, the MicroPitch is only a closed ecosystem if you allow it to be. The multifunctional EXP jack accepts expression pedals, tap switches, control voltage, or TRS MIDI connections, making it a malleable member of nearly any setup. The mini-USB port can also be used for MIDI communication, as well as updating the pedal with new firmwares as they are released. A handy recessed switch adjusts the I/O level settings for use with a guitar among other effects before your amp, or bumped up to line level for synthesizers, drum machines, effects loops, and more. The single input can also be toggled between mono or stereo usage, for sources utilizing TS or TRS cables respectively.

While some of its relatives in the Eventide pedal family like Space might have a more visible reputation among guitarists and instrumentalists, MicroPitch's decades-long legacy distinctly puts it into the category of "if you know, you know." Add MicroPitch to your pedalboard or collection of live effects to tap into a lasting mainstay of the pro studios churning out hit records.

Related ArticlesEventide H90 Harmonizer Pedal ReviewGroundbreaking Effects and Unparalleled FlexibilityA Brief History of Eventide, Pt. 1Trailblazing Audio Effects of the 1970s + 1980sA Brief History of Eventide, Pt. 2Processors, Pedals, and Effects for the 21st CenturyWeird FX: Pitch Shifted DelaysArpeggiated Echoes, Microshift Chorus, and Swirling CacophonySpooky Sound Design with Your Patch PalsSlimy Synths + Hair-Raising Setups to Creep Out Your Neighbors
Product Demo Videos
Eventide MicroPitch Delay Pedal With Synths
Eventide’s latest adaptation of one of their classic algorithms into a dedicated pedal, MicroPitch is a delay pedal with subtle pitch shifting for thickening up any audio signal. Popularized back in the day by rack-mount effects processors like the H3000, the new MicroPitch pedal draws from its legacy as a studio effect but is repackaged in a performance-friendly package. It contains two independent delays with their own pitch shifters, one up and one down, with the flexibility of blending between the two for subtle variations or dramatic transitions.

In this video, we’re pairing the MicroPitch with an Analog Four from Elektron, showing off a wide range of patches to give you an idea of how this effect can be used to enhance any sound. Thicken up leads or basses with a faux multitracked sound, enhance pads with lush modulated delays, or crank up the feedback and pitch shifting on percussive sounds for glitchy, pseudo-resonator special effects.
Halloween Inspired Sound Design : Patch Pals Spooky Sound Special (Very Scary)
Wes, Jacob, Brian, and Bryce go full on spooky with some synthesizers, pedals, mics, and slime!
Eventide MicroPitch Pitch Shifting Delay Pedal Reviews
Register with :