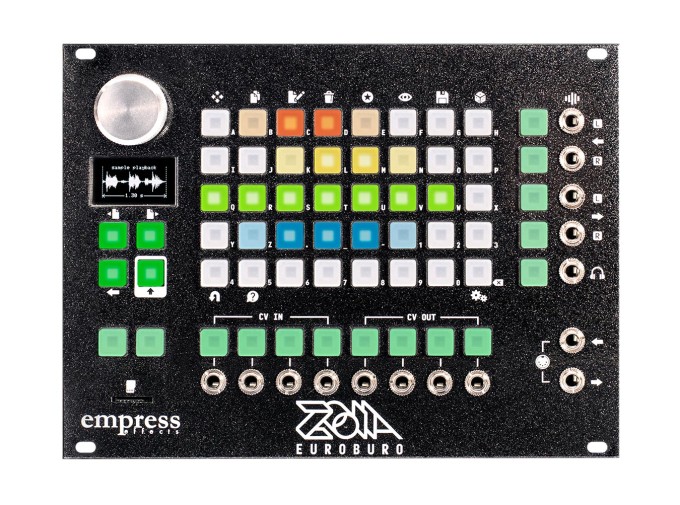 The Empress ZOIA Euroburo is a Eurorack adaptation of the ultra-powerful ZOIA pedal, retaining all the same features as the pedal version but adding extra CV ins and outs as well as additional function modules. The original ZOIA pedal was an entire self-contained modular environment with the ability to route effects and modulation throughout the signal path—and ZOIA Euroburo brings this concept full circle by taking it off the pedalboard and placing it directly into a modular synthesizer.

The RGB backlit buttons provide a tactile interface and allow for representation of the routing and module functions. The OLED screen adds another level of monitoring indicating everything from patch names to LFO waveforms. There are over 80 different modules that can be assigned to a wide variety of functions. The vast selection of CV modules includes classic modulation types like envelopes, LFOs, comparators, sample and hold, and slew limiters. Audio modules include oscillators, looper, VCAs, and more. The built-in effects include fuzz, delay, reverb, ring mod, EQ, and many others.

The ZOIA Euroburo features four assignable CV inputs and outputs, with the ability to mix and route any combination of internal or external modulation sources to the CV outputs. It retains the original ZOIA's MIDI functionality with MIDI in and out on 3.5mm jacks. It has stereo in and out as well as a dedicated headphone output.

Not a version 2, the ZOIA Euroburo is an entirely new creation that brings the flexibility and power of the pedal ZOIA into a truly modular environment.

Related ArticlesThe Patch Pals Take On The Empress Effects ZOIATips and Tricks for the Most Flexible Pedal and Eurorack ModuleStaff Picks: Best Synths + Modular GearOur Favorite New Gear in 2021
Product Demo Videos
Empress Zoia & Euroburo Module : Modular Problem Solving and More : with The Patch Pals
The Patch Pals Jacob & Wes Take on the @Empress Effects Zoia & Euroburo !
The Zoia is a unique Modular effects and synth platform that allows you to build anything your heart desires! Jacob dives into the complexities of routing and MIDI while Wes shows off some of the more basic and utilitarian functions.

Sit back and grab a snack while the Patch Pals discuss what makes this module magnificent.
Empress Effects ZOIA Euroburo Programmable Synthesizer Module Reviews
Register with :