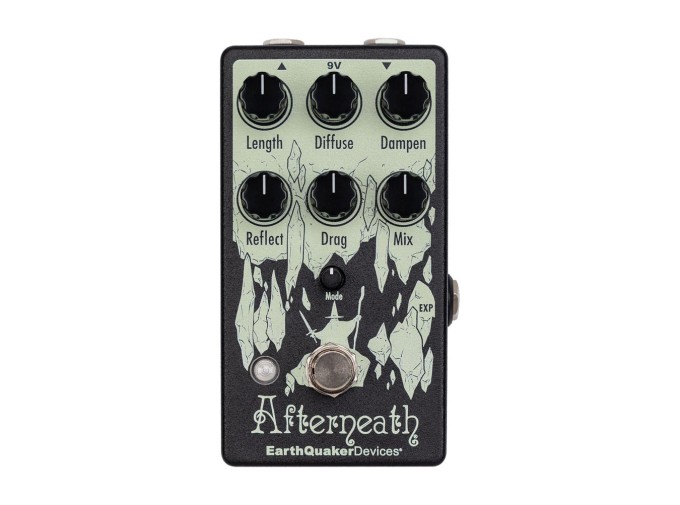 The Earthquaker Devices Afterneath is an out-of-this-world reverb pedal, turning your input signal into a swarm of delays that are just as suited to rhythmic patterns as they are for ambient applications. The front of the pedal displays a wizard in a dark cave where the sounds reverberate around the space and take on new character—an apt visualization of the pedal's character.

The Length parameter controls the decay length of the reverb, while Diffuse adjusts the spread of the reverb. Dampen shapes the tone of your signal from dark and moody reverbs to bright and clear repeats.

Drag is one of the more special parameters, turning the Afterneath into something more than the typical reverb. Drag separates the individual delay lines: when close together they sound more like a traditional reverb, but as they spread apart, they get more rhythmic and begin to impart a more delay-ish ping pong effect. Drag has nine different modes, set by the mod control and controlled by the expression/CV input on the side of the pedal. Modes include unquantized, unquantized with slew, unquantized V/oct, chromatic scale, major scale, minor scale, pentatonic scale, octaves and fifths, and finally octaves—all of which allow you to turn Afterneath into something not unlike a pitch shifting spatial effect.

The Reflect parameter is the regeneration or feedback of the reverb, and goes up to self-oscillation, allowing the pedal to act as its own sound source. Finally, Mix sets the balance between the input signal and the reverb effect. Follow the wizard on the pedal and cast a spell of sound with the Afterneath.