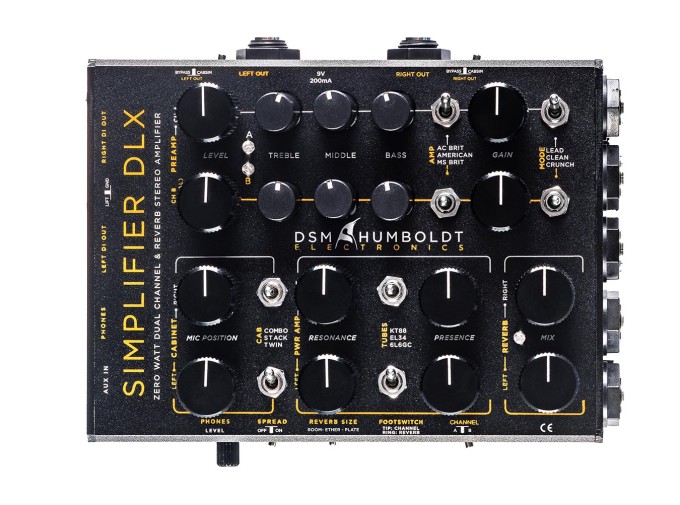 Confidently record and perform without an amp by using the compact Simplifier DLX from DSM Humboldt, a stereo amp and cab simulator. Packed with all manner of connections and features, the Simplifier DLX has no elaborate menu system but uses a knob-per-function interface for maximum control. With two inputs, two outputs, and a stereo effects loop, you can run it in full stereo, in parallel with two amps, or as a dual mono, two instrument hub. Each channel has independent controls for tone, an amp switch, a cab switch, mic placement control, and reverb mix letting you create interesting stereo spreads and distinct voices.

Choose from a bevy of delicious sounds with two channels as well as three way amp, gain mode, and cab switches. While both channels feature the same controls there are slight differences: channel A models a cranked distorted amplifier that is perfect for aggressive playing, while channel B is similar, but a little warmer and rounder designed for sweet clean tones. Using the included footswitch, you can easily switch between the two channels, as well as engage the built-in reverb.

Aside from the incredible tones, the versatile reverb includes a Room, Plate, and Ether style reverb for different sizes that can work with any application. Add even more effects with a stereo send/return and connect directly to the mixing board with two XLR outs or into two amps with an option to disable the preamp for a direct connection.

Connect an external source with a 3.5mm aux in and practice with headphones using the 3.5mm headphone output with dedicated volume control. Indeed, the Simplifier DLX from DSM Humboldt is a vital part of any modern pedalboard for amp simulation with a little extra character without having to lug around the real thing.