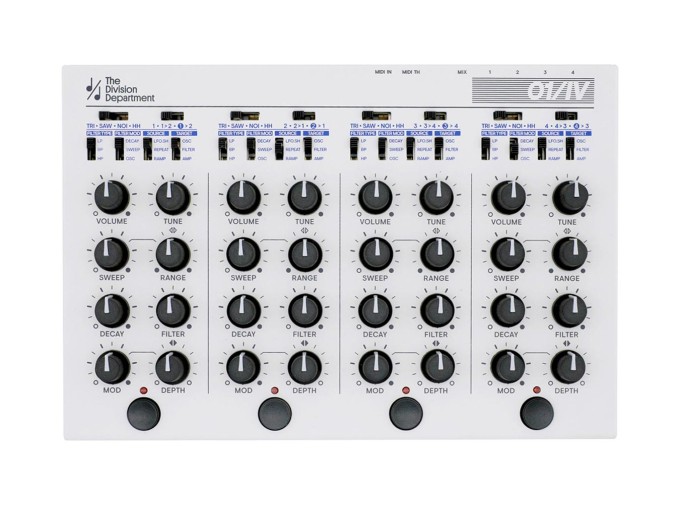 The Division Department 01/IV is a four-channel analog drum synthesizer perfect for creating a wide palette of sounds with hands-on control. It features four identical channels which each can synthesize a wide variety of drum sounds from kicks, toms, cymbals, hi-hats, snares, or even bass lines. The channels can also be layered, combined, and modulate each other in pairs for FM operation.

Each channel has eight knobs, six switches, individual output, and a trigger button. Channels can either be triggered using their buttons or sequenced using external MIDI gear. The oscillators feature four modes: triangle, saw, noise, and hi-hat. The per-channel multi-mode filters offer 12dB lowpass, 6dB bandpass, and 12dB high pass operation. The envelope can modulate the VCA, pitch of the oscillator, or the filter. The envelope can go from snappy 1ms decays to five-second long trails. A secondary, ramp envelope is also present, also with the ability to modulate the VCO, VCF, or VCA. The VCA can also be set to drone for sounds not usually found on a drum machine. The repeat function adds multiple triggers to retrigger the sound and is useful for rolls, flams, and emulating claps at fast settings.

The LFO defaults to triangle but other waveforms, including sample and hold, can be accessed using MIDI CC messages. The LFO can run well into audio rate for an additional FM source. The channels are mixed together at output on a 3.5mm jack, but patching out from an individual channel's output jack removes it from the mix. The 01/IV is a great drum brain, with each non-specified channel capable of producing a wide variety of sounds from standard tom hits to FM drones and everything in between.

Unlike many drum synths, 01/IV features four identical channels. Where other instruments might make distinctions between the purpose of each channel (kick, snare, etc.), 01/IV instead provides access to raw synthesis elements to allow users to sculpt their own tones, be they familiar or completely alien. Each voice provides a choice of sound source (triangle, saw, noise, hi-hat noise), filter type (lowpass, bandpass, highpass), and modulation controls, providing access to everything from classic analog drum tones to inter-voice FM.

By providing this open-ended approach to sound design on each of its four channels, the 01/IV can seamlessly morph from percussive to melodic roles, from intense FM to clean, rubbery toms, from understated rhythms to in-your-face blasts. And best of all, the one-knob-per-function interface and built-in trigger buttons make this a pleasure to play, encouraging real-time exploration in a way uncommon for modern drum machines.
The Division Department 01/IV Analog Drum Synthesizer Reviews
Register with :