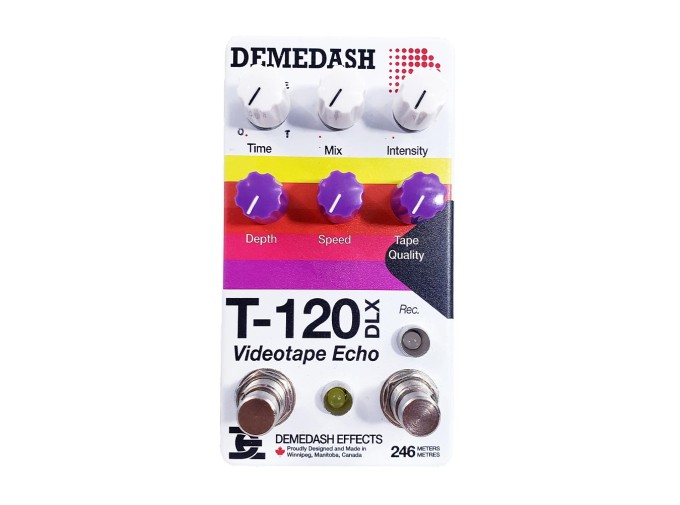 Expanding upon their amazing tape-inspired echo comes T-120 Deluxe from Demedash Effects, elegantly emulating the soft and crispy textures of VHS tape. At its core, T-120 Deluxe shares all the same features as the T-120, including delay time, feedback, modulation depth & speed, and tape-quality. The delay time is expanded by an extra 200ms for a total range of 60ms-1200ms, capable of achieving all sorts of semi-chorus, slapback, and other effects. With the addition of the Tap/Swell footswitch, you can tap in your tempo and dictate what time division you need for your delay in the alt mode, be it quarter, dotted eighth, eighth, or triplet notes. The Intensity knob can be used for a single repeat all the way to self oscillation—oscillation can be tamed by a smaller intensity or degrading the tape-quality.

Modulating the delay time is where you can get subtle shifts, vibrato-like effects, and much more. This is done via Depth and Speed controls for setting the level and rate of modulation, respectively, and entering the alt mode allows you to control the variable modulation waveshape and introduce randomness. At fully clockwise, the Tape Quality is the cleanest setting for the delay, but turning it back introduces more of the lo-fi textures that the T-120 Deluxe specializes in. These features are even greater on the Deluxe unit thanks to the TRS stereo output, giving you a wide and lush stereo image, and the introduction of the Swell feature allows you to perform the echoes for transitions and build-ups.

Along with the ability to access how the delay trails off, control the overall mix, and engage via latch or momentary, the T-120 Deluxe is the ultimate pedal for adding echoing nostalgia to your sound.