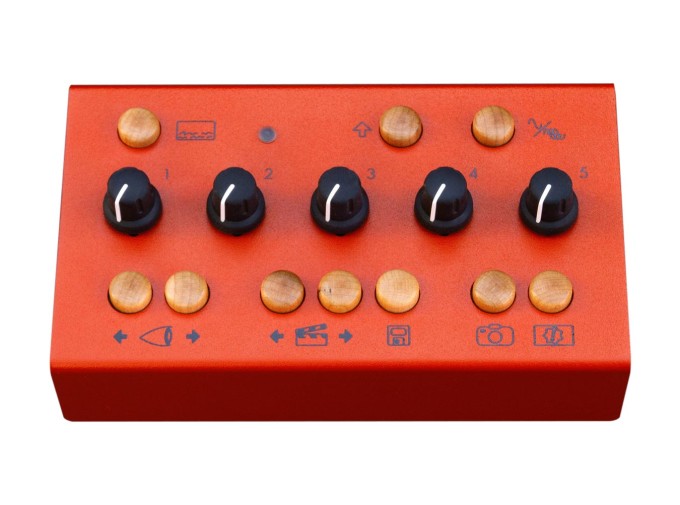 EYESY from Critter and Guitari is a self-contained video synthesizer, perfect for adding reactive visuals to your music or live performance. Critter and Guitari retain their simple design interface, marrying functionality with streamlined controls. It features a collection of modes or pattern generators that provide visualization to an external audio signal. Modes come in two primary categories: scope and trigger. Scope directly visualizes incoming audio, much like an oscilloscope. Trigger mode reacts to audio transients, so when a signal passes above a threshold, it triggers an animation. EYESY features five mode-dependent knobs, which offer control over parameters such as color, size, and position. In the normal mode, EYESY clears the screen of animations every time a new one is triggered. With the persist toggle button active, the visuals go into a drawing mode, piling up on each other.

Save your favorite modes to a scene, storing all of the mode settings, including the knob position and Persist settings. The mode buttons and scene buttons each toggle between preset settings, letting you queue up a set of visuals and easily switch between them. Take a snapshot of your visuals using the screen grab button, great for promotional stills. In addition to reacting to an audio signal, EYESY reacts to external MIDI signals via TRS Type-A and USB. Send CC messages to add parameter automation or switch between scenes on the fly. EYESY outputs signals on both HDMI and composite and works worldwide with compatibility for both NTSC and PAL. EYESY is fully reprogrammable, allowing you to add your own visual modes or otherwise change behavior. Connect not only with physical connections but also over WIFI, as it functions as a WIFI access point.

EYESY offers a fantastic way to get started with reactive visuals. It's a powerful tool for video generation, but most importantly, it is fun. Simply plug an audio source or MIDI controller and start creating dynamic and mesmerizing video.