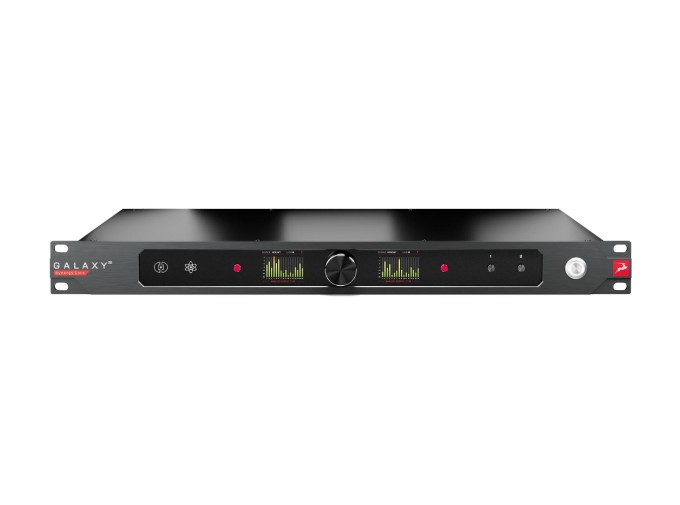 Offering pristine conversion, 64-bit AFC™ clocking, 32 channels of analog I/O, and multiple industry-standard digital I/O formats, the Galaxy 32 Synergy Core from Antelope Audio makes zero compromises on quality, flexibility, and sheer processing power. The Galaxy 32 is compatible with a stunning variety of setups, thanks to the multitude of digital formats it supports, all of which can be used simultaneously. Thunderbolt 3, Dante, S/PDIF, HDX, MADI and ADAT I/O are all supported, making the Galaxy 32 an extremely powerful asset in audio production systems of any scale.

With its massive array of inputs and outputs, the folks at Antelope have included a number of workflow-enhancing features, including an intuitive drag and drop application for instant repatching, four onboard stereo mixers with 32 inputs each for monitoring or summing, standalone operation for when you want to get away from the computer, and wireless control. Additionally, two 1.8" IPS display screens show levels for individual channels, providing instant visual feedback.

High CPU usage can be an obstacle in large-scale production environments, and Antelope rises to the challenge with their acclaimed Synergy Core technology. Synergy Core allows you to run a suite of powerful, analog-modelled rackmount-style plugins directly on the Galaxy 32, freeing up processing power on your computer while providing characterful compressors, preamps, EQs, and effects to any tracks in your mix. With the Galaxy 32's powerful six DSP chips and dual-FPGA architecture, these effects can also be monitored in real time with virtually no latency.