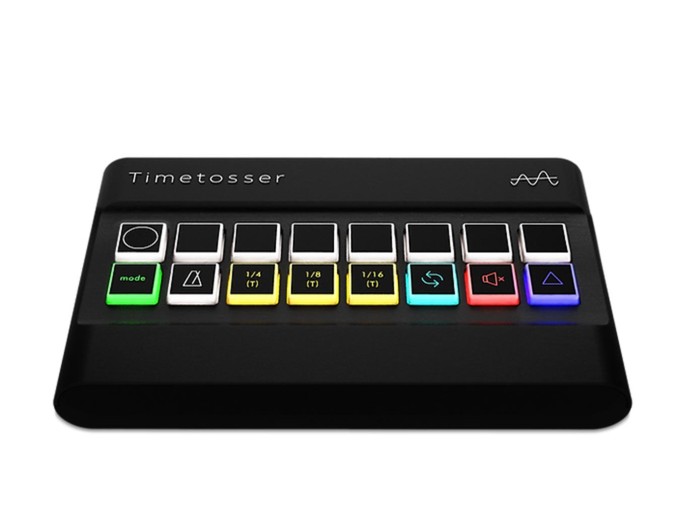 Add flare, chops, and repetition to your performances and recordings with Alter Audio's Timetosser, a performative audio re-arranger. Constantly recording into a buffer for audio manipulation, the top eight buttons provide a division of the current buffer in which you can effect via looping, reversing, and even playback and beat juggle much like you could in a DJ setup or even on a drum machine. To capture the audio at a correct tempo, the metronome key acts as a tap-tempo feature for matching the beats of what you capture. Alternatively, you have full MIDI implementation to sync Timetosser to other musical devices as well as an analog clock input to even integrate with a modular system.

To perform a section of your audio, you can simply jump to it by pressing the section or even loop it by holding down the section. The length of the step in which you press or hold is determined via the three note value buttons, offering quarter, eighth, and sixteenth notes as well as triplet variations of each. Utilizing the mode button, you can access how the Timetosser reacts in response to your playing, following any combination of un/synchronized looping and un/quantized playback. Timetosser can send you back in time by engaging the reverse key, and even get a record-stop effect when holding down shift simultaneously. Along with performative re-arranging your audio, you can also apply rhythmic muting or just complete muting to pull elements out of the audio for room to breathe or feature other elements.

Easily set up Timetosser with your DAW via the available VST plugin, making it easy to remix audio on your computer or even utilize Timetosser as a master effect for expressive DJ scenarios. Whether you're wanting to inspire glitchy audio playback or just looking for easy ways to remix your instruments and tracks, Alter Audio's Timetosser is an amazing tool on the stage or in the studio.