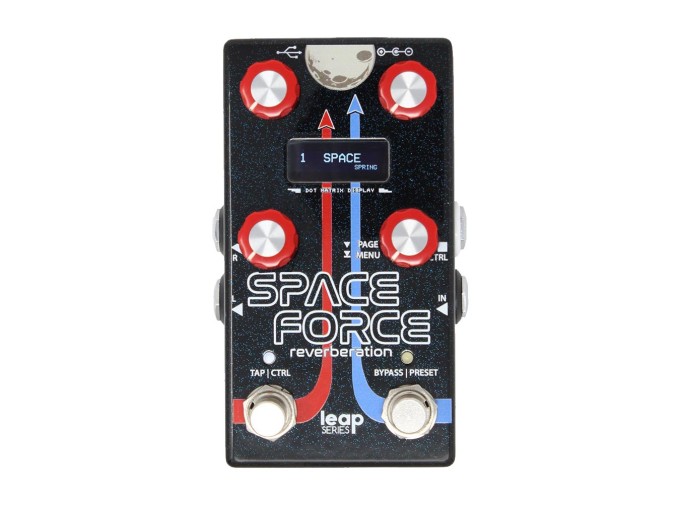 Improving upon a classic from their Neo series, Alexander Pedals' Space Force is a stereo, multi-engine reverb pedal bringing loads of dimensional flavor and parameterization for expressive effects chaining. Expanding into their new Leap series, the Space Force is the successor to the late and great Space Force with new processing power, connectivity, and even more reverb options to choose from! The upgraded UI of Space Force lends itself to deeper parameter tweaking of single engines by including a push knob and screen for navigation. Space Force's increased DSP processing via the FXCore chip produces eight times more power than the previous Neo pedals, helping push all the innovative and delicious characteristics while keeping the small pedal form.

Focusing solely on the sonic qualities of Space Force, eight different engines are available to choose from for creating short and intimate rooms to deep and extended dimensions to even warbly and tappy effects. Classics like plate, spring, and mod hall offer your go-to mixing and spatialization processing, while pitch creates shimmering effects and lo-fi produces the classic "shoegaze" effect of gnarly tails. Some other unique effects include the highly versatile dynamic engine for creating gated, swelling, or blooming cathedral-like reverbs along with delay-based reverbs such as the BBD-style analog mode and freezing buffer echoverb mode. Each mode comes with a mix control, but all other parameters are specialized based on the effect type, be it reverb size, tone, modulation rate and depth, pre-delay, and so much more.

Where Alexander Pedals truly rise above the rest lies in the performance and control capabilities, and Space Force lacks in neither department. Easily create time-based movement via the auto-ramping function across multiple parameters, all from the push of a footswitch, or introduce external control via the multi-jack input for adding an expression pedal, additional footswitches, or even MIDI! Additional MIDI control can be accessed via the USB input that also acts as a firmware upgrade jack for future improvements down the line. With 32 onboard preset spaces that can be managed and accessed all from the pedal itself, the Space Force is one of the most versatile, programmable, and compact stereo reverbs on the market for personalized dimension and spatialization.

Related ArticlesArtist Picks: Best Gear of the Year 2022Synthesizers, Drum Machines, Effect Pedals, Eurorack Modules, and More!
Product Demo Videos
Best Gear of the Year : 2022 Artists Picks Part 1
It's nearing the end of another monumental year in synthesizers and pro-audio, and we look back with our friends on some of our favorite pieces of kit we tried out in 2022!
Alexander Pedals Space Force Expansive Reverb Pedal Reviews
Register with :