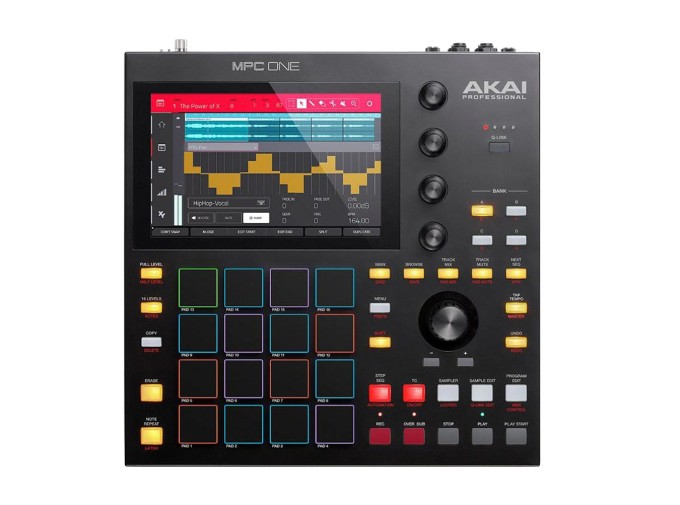 The MPC One brings the functionality of an MPC into a smaller, more affordable package—retaining the powerful OS, touch-screen, instruments, and effects found in the larger versions. It's perfect for musicians and beat makers who are just getting started with hardware, or who are looking for MPC-style sequencing with a more portable design. It can work as a controller for your DAW, or as a standalone device, allowing for a wide variety of applications.

An array of physical editing buttons and utilities allow for a fast workflow when paired with the touch-screen, making navigating your session a breeze. The 7" high definition touch screen is the same used on the MPC Live, and is both clear and responsive. The touch screen allows complex velocity curves to be entered with a single gesture, or controlled and edited with the utmost precision. Additionally, the touch screen can be used for automation of parameters using the automation lanes. Or if you'd like finer control and a tactile interface, automations lanes can be edited in real time using the capacitive touch encoders.

The pads are the most characteristic aspect of an MPC, and the One features 16 velocity and pressure-sensitive RGB pads that are responsive and playable. You can real time record your performances on the pads, or use the integrated sequencers. The note and chord modes allow you to quantize the pads to a scale, allowing you dynamic melodic playing without worrying about hitting the wrong notes. The note repeat function allows groups of notes to be entered into the sequence with the press of a button, allowing for hi-hat stutters and snare rolls, quantized to the project BPM. While beats can be quantized, individual hits or whole sequences can be nudged off the beat for a more swung, looser beat with a humanized feel.

The MPC One comes loaded with sounds, but you have plenty of space to load your own between the 2GB internal space for user sounds, plus SD card that allow you to add additional samples with the only limit set by the size of your SD card. The internal samples include everything from classic drum machines to modern trap vocal samples with plenty in-between and beyond. Additionally, the Stereo inputs allow you to sample external signals with a dedicated adjustable volume trim pot. Sample slicing is incredibly simple, with the ability to use threshold, regions, BPM, or manual pad assignment to slice samples and assign them to the pads.

Beyond sampling, the MPC One features three synthesis engines. The Tube synth emulates analog polysynths with rich filters and expressive response. Electric brings Rhodes-style electric piano lines to your MPC. BassLine emulates classic bass monosynths, everything from 303s to Moogs for rich and fat basslines. These all have their own effects including both time and timbre based effects to allow you to sculpt your own sounds. The four capacitive encoders allow direct, tactile control of the settings of the synthesizer engines.

The One also includes a great selection of effects which include reverb, delay, filters, compressors, distortion, and EQ. The touch screen can act as a XY pad for effects, allowing for another dimension of hands-on control of your sounds. There are eight CV channels on four 3.5mm TRS jacks, which allow for sequencing of your modular and semi-modular devices, bridging the gap between MPC and modular. The MPC One is an all-in-one music machine, capable of dynamic beats, complex melodies, in-depth sequencing, and intuitive user interface all together in one package.

Related ArticlesMay the Force Be With YouAkai Force Performances + ChatLearning Synthesis: SamplersRecording and Manipulating Sound
Product Demo Videos
Akai MPC One (why it's great with midi and eurorack hardware!)
The Akai MPC One (and also the new MPC Live II) is not just a great sampler, but also a powerful centerpiece of your hardware studio. The MPC velocity sensitive pads are great for programming in drum patterns with the built in samples or ones that you record or import. There are built in synths as well, and the MPC One can sequence tons of midi hardware as well as CV/Gate hardware like eurorack or semi-modular synths or even vintage pre-midi gear. There are 8 CV outputs which can be configured any way you like to match the gear you are using with it.

If you want to use an external synth more than once in a track you can also easily sample it into the MPC One. The sample gets saved into the project so your samples stay organized. The MPC One is a great sampler/sequencer alternative to all of the XOX style sequencers, you can add some more human feel to your patterns by programming them in with the pads, but you also have quantization or piano roll style editing options available.
Akai MPC One Sampling Workstation Reviews