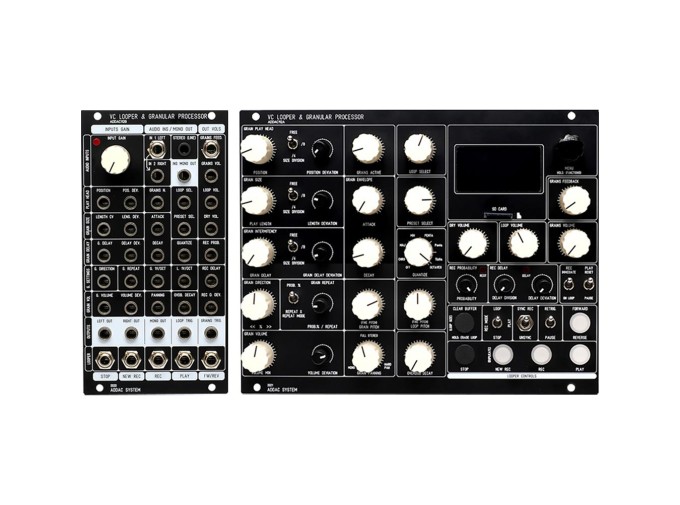 The ADDAC 112 VC Looper and Granular Processor is ADDAC's take on granular synthesis, taking the concept in a new direction with comprehensive sound manipulation that is sure to delight. It comes with two panels, one for the controls and one for all jack inputs and outputs. This gives users plenty of room with the main controls without patch cables in the way, with the flexibility to position things exactly how you need for your personal system.

All of the panel controls include a corresponding CV input on the secondary panel to provide extensive sound shaping and mangling possibilities. Many of the controls also feature a secondary corresponding deviation control, an internal random modulation source with a range set by both the initial knob and the deviation knob.

The module features three main blocks of functionality: looper engine, granular engine, and input/output section. The recording buffer in the loop engine records audio up to five minutes in length, recording at 16-bit/44.1kHz. The module saves these samples onto an SD card into preset folders, with 99 loops per preset. Select loops with the panel control or the corresponding CV input. Transpose the pitch of the loop by -3 to +2 octaves from the original pitch with optional quantization. Record over the loop with the overdub function with a dedicated decay control to determine how much of the original loop is preserved. Set the recording probability to determine the likelihood of the module recording a new loop. Add a pause to the recording after it reaches the end of the buffer at a multiple of 1/32 of the buffer length with the recording delay control.

The loop engine feeds the granular engine, providing source material for sonic exploration. Cutting the audio up into tiny snippets of sound, the granular engine turns audio loops into textures and clouds of sound particles. The granular engine allows you to play back up to 32 grains at the same time—with more grains playing at once, you can create complex sonic results that can conceal your loops' original character. Set the grain start point and length with optional size divisions of /16 or /8 of the length. Grain intermittency adds a delay between the end of a grain's playback and when it repeats. The grain repeat switch and control have two functions that determine the probability a grain repeats with the same settings or if the module calculates new parameters. Grain direction sets both the grain playback direction and the probability that the grain plays forward or reverse. An attack/decay grain envelope adds rising and falling movement to the grain playback.

The 112 features dual mono modular level inputs, plus a stereo input for line level signals, which all combine and mix down to a single mono channel. Independently set the volume level of the dry signal, looper engine, and the granular engine. The grains feedback knob controls the amount of the granular signal that passes back to the looper to alter further. The outputs include left, right, and a mono output made of the combination of the left and right signals.

The 112 combines the functionality of a looper and granular effect with fantastic results. The inclusion of internal random modulation and probability controls are features lacking on many of Eurorack's sampling and granular modules. Deep sound shaping possibilities and control both internal and external make the ADDAC112 an excellent choice.